Opinion: It’s time to take pride in the Pride Rock 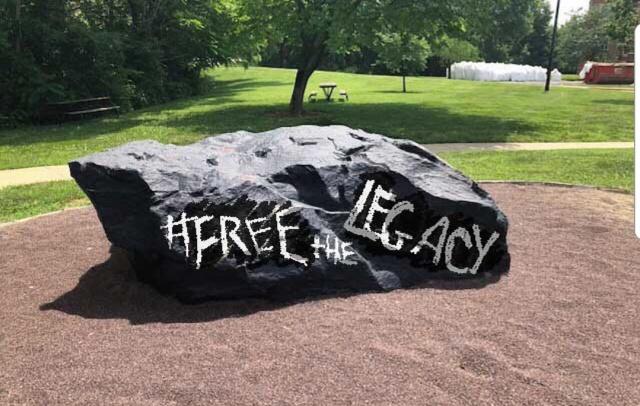 Back in July, before school and resumed and Lindenlink was mourning the loss of its print publication, The Legacy, the rock was convenient for a meme. But even then, the rock proved useful for declaring a message.
Graphic by Kat Owens

Originally, the Pride Rock was made into memes and even stirred up scorn in students.

Now, the Pride Rock has become the best way for campus organizations to advertise their events and causes.

Back in May, students were complaining about the 11.75-ton rock that showed up on campus.

If you haven’t heard, the over-sized rock sits between Hunter Stadium and Hyland Arena. Its official title is the Pride Rock and Angie Royal, director of Student Involvement, estimated the rock cost between $4,500 and $4,800.

I recall students (myself included) complaining – saying things like “Why did the university spend money on this?” The reasoning being money could have been allocated to funding for better meals or to benefit other departments.

So, I went and talked to Royal about the budgets. Once money is assigned to a certain department, it stays within that department. Royal said even if she wanted to, she did not have the ability to transfer the money for any other cause.

The $4,500-4,800 came from the student organization fund. Clubs are allocated a certain amount of money to spend every year on campus events. Last year the student clubs did not use all of the money.

Instead, Royal left the decision up to Student Government, who manages the fund. The students decided to invest in a spirit rock to build tradition on campus.

Well, four clubs have taken advantage of painting the rock as advertising and that has made students talk once again.

And what are they talking about? What is on the rock. It sounds simple, and that’s what clever advertising does.

The Pride Rock, once the butt of memes and jokes, has now become this campus’ best form of advertising.

Recall the last flyer you saw or the last three Snapchat stories you watched or the last four Instagram posts you liked. For me, it’s hard to even remember what I wore yesterday.

So unless you have a photographic memory, calling to mind advertisements is hard. Let’s face it, we are bombarded with messages on and off campus daily.

The average American sees anywhere from 4,000 to 10,000 ads a day, according to Red Crow Marketing Inc.

But students don’t see a giant rainbow rock every day do they? Nope, only one. That’s why so many students were talking about it when the Gender and Sexualities Alliance painted it for National Coming Out Day on Oct. 11.

GSA president Brooke Parker said the rock has provided an opportunity for her club to get important messages out to the Lindenwood body about the LGBTQIA+ community and has provided good club bonding.

Therefore, the most unique and attention-grabbing form of advertisement campus organizations have is now the Pride Rock.

The best advertising strikes people’s curiosity and gets them talking. If we want to promote ourselves and causes, we have to get creative. For example, when I wrote the opinion “Top Spots to Drop,” after it was published, I put certificate frames in all the bathrooms mentioned with QR codes linking back to the story. Before the frames were up, the story had about 600 hits, now it has over 900 hits.

(All credit goes to assistant professor Andrew Smith for the QR code idea and Lindenlink chief designer Kat Owens for creating the certificates because I am not that smart nor creative. I just work command strips.)

While I would love for the rock to be more flexible with the painting approval process, Royal did make a good point.

She said that at her prior institution, where the policy was much more relaxed, the rock ended up being graffiti-ed with mean language or rival Greek organizations would paint over their events to sabotage each other. That’s petty.

Therefore, like most things at Lindenwood, there is now a Pride Rock request form on Involve U clubs can fill out. All they need to do is provide a sketch and use funds to decorate the rock. Royal said three cans of spray paint should do the trick.

In the future, the Pride Rock could be painted for home-openers, graduations or if departments want to advertise an event or new major.

If you have something you want to promote, in the name of gravel, take advantage of this 11.75-ton rock and paint it!