Lindenwood football manager finds his place on the team 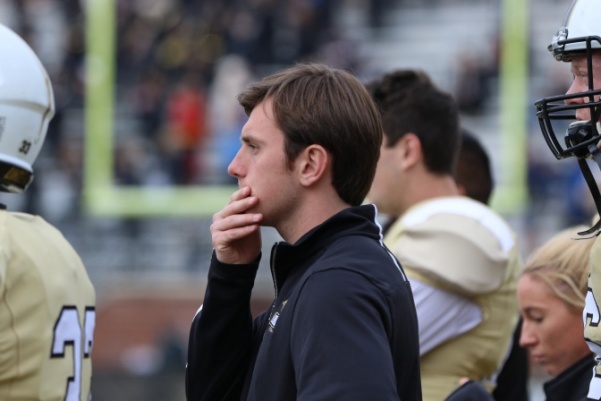 Junior Zach Shepard considers himself a part of a brotherhood as the football manager at Lindenwood.

Shepard said he played high school football for four years in his hometown of Troy, Missouri, but was too small to continue playing in college.  He also set up practice drills for his school’s basketball team, and at Lindenwood, he was hired to film games and practices for women’s basketball.  That job lead to him becoming a manager for the football team starting in spring 2018.

Because football gives him a busy schedule, Shepard said he manages his time better because of his involvement with college sports.

“I love how it challenges me schoolwork-wise, because it really encourages me to get my work done,” he said. “I just love the overall bonding experience and the traveling and just everything about college football in general is something what [sic] I’ve dreamed about for a long time.”

Shepard also has high-functioning autism, which has caused other obstacles for him to overcome, including difficulty communicating and people condescending him.

“Throughout my life I’ve had to deal with people who don’t understand autism,” he said. “I kind of blamed it on myself, because autism is part of who I am.”

He said he has learned from his past and found ways to treat symptoms of his disability, such as repetitive behavior, through counseling.  His involvement in athletics has also lead him to improve himself.

“When I was growing up, I was one of those guys who would follow what others were doing instead of being a leader,” Shepard said. “What sports taught me how to do is how to be a leader instead of a follower.”

Shepard said his religion inspires him to influence the world positively.  At Lindenwood, he rekindled his commitment to his beliefs after hearing from his church that 70 percent of Christians lose their faith after high school.

“A small part of me was worried that I was going to end up being a part of that 70 percent,” Shepard said. “After freshman orientation week, I scouted for ministries and Christian organizations to get involved with.”

From there, he joined Campus Outreach, his main activity outside of sports and academics.  Ryne Brewer, the group’s campus director, said Shepard has improved greatly both in his self-awareness and interpersonal skills over the three years they have known each other.

“He’s a fairly determined person,” Brewer said. “He kind of dreams up something in his mind, and he really gets kind of passionate about it and wants to achieve it. I think that just comes from the way he relates to sports growing up.”

Brewer said that Shepard also has a passion for Christ and for other people.

“Interacting with Zach has probably been one of the most rewarding things for me and one of the most challenging and formative things for me, just in my own life because he’s a guy […] who’s very loyal and cares a lot about people, and he’s also a guy who thinks very concretely and likes to know the why behind the what,” Brewer said.

Shepard said he has also found friends on the football team, including his roommate, a safety.