Men’s basketball goes 2-0 over the weekend 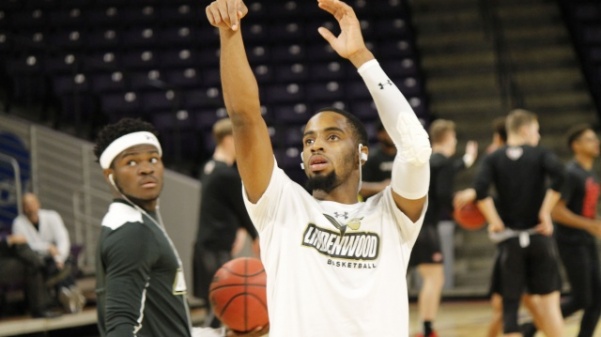 TJ Crockett (left) looks to see if Brad Newman (center) made a free throw as they warm up before the game against Minnesota State University, on Nov. 9. Newman lead the team for points scored during the game.
Photo by Scott Mandziara

The Lions grabbed two wins over the weekend to bring their record to 4-3.

The first game for the Lions came Friday against LeMoyne-Owen College. The Lions got off to a good start as they took a nine-point lead into half-time. Sophomore Diego Womack led the way with 11 points and four rebounds in the half. Senior Brad Newman followed closely behind with eight points.

On the other side, it was Devin Booker who led the way. No, not the 13th overall pick for the Phoenix Suns in the 2015 NBA Draft, but rather a freshman guard for the Magicians. He had 17 points to lead all scorers at the half. The Lions led 46-37.

At the start of the second half, the Lions hit three consecutive layups to push their lead all the way to 15. Then, the Lions went cold, as they shot just 27 percent from the field in the half and only made one three-pointer. They made up for their inefficiency by getting to the free throw line and hitting 11 of their 14 shots. The Magicians went on a 15-3 run late in the second half, which cut the Lions’ lead to just two with 48 seconds to go in the game. Junior Chris King drove to the basket and scored on a layup to push their lead to four and ice the win for Lindenwood, 78-74.

Booker led the way for the Magicians, finishing with 21 points. Newman scored 12 in the second half for the Lions to give him 20, a team high. Womack followed behind him with 13 points and nine rebounds.

“We survived a couple of tough scratches and got a huge basket from King late,” Head Coach Lance Randall said. “Diego was a load for us, as we got a good lift from our bench. This was a great early season battle for these guys.”

Their next game came Saturday afternoon against Lane College.

The Lions were down early in this one, as the Dragons were leading 28-25 with 5:37 left to go in the first half. The Lions then went on an 18-7 run, which gave them an eight-point lead going into the break, leading 43-35. It was Newman that led the Lions in scoring at the half with 11. Junior Luka Radosevic followed closely behind with nine points. The Lions shot 64 percent from the field in the half, and hit seven of their 12 threes.

The efficiency continued into the second half for the Lions. Their lead reached as high as 24 points. They shot 65 percent from the second half and hit on six of their 11 threes. They outscored the Dragons 46-37 in the half, and won the game 89-72.

Newman ended the game with another 20-point effort for the Lions. Senior Chandler Diekvoss contributed in all areas with 14 points, six assists, and nine rebounds. Senior Adam Pohlman was the only other Lion that scored double digits, he ended with 12 points and five assists.

The two wins for the Lions bring them above .500 for the season. Next, they come back home to Hyland Arena for their home opener where they will play Missouri Baptist University, Monday at 7 p.m.