When Deb Nicolai stopped by the KCLC office, it ignited a passion for radio 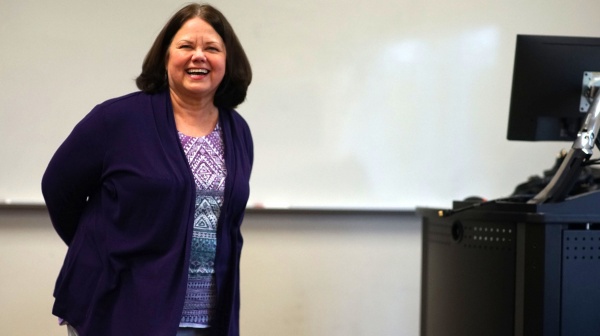 Before her Fundamentals of Oral Communication class began, Deb Nicolai was spinning in the front of the room.
Photo by Mitch Kraus

Associate professor Deb Nicolai got her first job with Lindenwood when she stopped by the radio station office to say hello.

“The girl who was the KCLC office manager was getting married and moving — job opening, duh,” she said.

Nicolai said she wasn’t sure if she wanted the job because it was full time and she was going to school, but when she learned that her tuition would be paid, she agreed.

“At first I was like ‘Not really, at the radio station?’” she said. “That’s the whole crazy thing about this. I am corporate communications.”

She had taken Radio Production as a “fun elective” and based on that experience, was offered the job, but being on air was not her favorite thing.

“I was so nervous,” she said. “You got the headphones on, and you hear your voice, and you hear every breath…. I tried not to breathe. Then I’m not breathing, and I’m trying to talk, and then I couldn’t breathe, and I couldn’t talk.”

After she finished the class, Nicolai never went on air again until it became a part of her job. When a student didn’t show up, she said someone had to physically be in the studio to put the CD in the player and press play.

“I went from dreading it, to ‘OK, this is OK, this isn’t bad,’ and then looking forward to that opportunity to being on air because it was a whole lot more fun to be back in the on-air studio playing music than it was to be sitting behind a desk answering a phone,” she said.

Even though Nicolai didn’t initially like being on air, she said she always loved radio and music.

“It was always on, and our family owned more than one,” she said. “I remember my family listening to Jack Buck and Harry Caray broadcasting the Cardinal baseball games.”

Nicolai began teaching in 2001; Communication For The 21st Century was her first class. Classrooms had no overhead projectors, smartboards or computers then.

Now Nicolai teaches Oral Communications classes, and she tells her students not to dread being up in front of the class. She encourages them to change their attitude by picking a topic they enjoy talking about.

Chad Briesacher, the current director of operations at KCLC, said he didn’t have Nicolai as a professor, but she was his adviser.

He was the first person in his family in a few generations to go to college, so he didn’t have anyone to help him with school. Nicolai filled the gap, whether that be advising, graduating or adding a minor, he said.

Now, working with her, he said he gets to watch her through a different lens.

“She’s a great colleague; she’s always happy and supportive,” he said. “She’s the same person that she was 15 years ago with me, to the students now.”

Glen Cerny, KCLC’s general manager from 1986-2000, got Nicolai involved with National Broadcasting Society. He also is the reason she came to Lindenwood in 1989.

Nicolai was in the first graduating class of St. Charles Community College when Cerny came to speak about Lindenwood and the radio station. She thought it sounded fun, and everyone told her that she was “basically a glorified secretary” with an associate’s degree.

“And what’s my first job here?” she asked. “I’m an office manager, basically secretary of the radio station with my bachelor’s.”

Cerny said he and Nicolai worked together well because they were “opposites.”

“She could provide order to chaos when you’ve got so many students and so many things going on,” Cerny said.

They trusted each other, he said, which made it very easy to work on and accomplish things.

Jim Wilson, then dean of Communications at Lindenwood, now executive director of NBS AERho, said Nicolai was “the greatest front door we’ve had at KCLC” because of her smile and pleasant attitude.

The first trip Nicolai took with NBS was to Los Angeles as a student in 1992 and that’s when she began collecting magnets as a memento.

“Magnets are small; you stick ‘em in your purse, you get back and you add it to the collection,” she said.

Nicolai has more than 40 magnets and displays most of them on a filing cabinet behind her desk in her KCLC office. It’s her “plug” for NBS because she gets a magnet from every place they go, and that has included Dallas, Miami, Chicago, New York, Washington D.C., Nashville and Minnesota.

Nicolai said the conventions offer the students a chance to learn new things and make connections in their fields.

She said she already is excited for the next trip, scheduled for March in Philadelphia. She has never been there, and, well, that means, she is missing something she values.

“I do not have a magnet from Philadelphia,” she said.