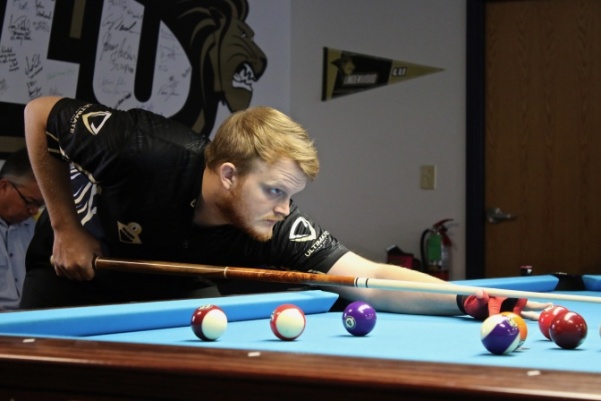 Hunter Davis prepares to shoot during competition against the Melton's Maulers in October at the Billiards Arena in Lindenwood.
Photo by Merlina San Nicolás

The Lindenwood billiards team capped off their fall season with five wins and two losses.

In the Durbin Cup back in September, the Lions started their season competing against against the Durbin Destroyers, a group of professional players.

Taren Stewart,  Rusell Carter and Taylor Hansen were the top players for the Lions squad, but the Destroyers ultimately came out with the win 23-9.

On their following tournament, the Lions rebounded for a 14-5 win over Melton’s Maulers in the Lindenwood Billiards Arena.

Their second win of the season came when they encountered Rudy’s Rackrunners. Larson scored a perfect 15-ball score of 45 and a 3-0. Stewart was also a key player for the Lions with 42 points in 15-ball and 3-0 in match play. The Lions finished with a 14-5 victory.

The Lions then faced Teachers Billiards, a veteran team that included a former Lion and a four-time collegiate national champion Brianna Miller.

Larson shined once again and posted a perfect 15-ball score of 60 to help the Lions win 9-7. This win brought the Lions to a 3-1 record.

But their winning streak continued as the Lions defeated Maplewood Shotmakers 13-4 in October.

Stewart and Larson were perfect for 15-ball with scores of 51 and 50 respectively, and freshman Robbie Patrick set the pace with a 59 of 60 in 15-ball and was overall the best player for the Lions.

Their first tournament in November was against One More Shot, and this time, the Lions had to fight harder for their win.

The squad consisted of Larson, Bond and current national collegiate 9-ball champion Hansen. The three combined scored a total of 158 points. The Lions finished with a 10-7 win.

But their winning streak came to an end when the Lions faced The Biggens Breakers, losing with a 10-7 score at the Lindenwood Billiards Arena.

Bond, Brandon Jordan and Joe Bruno each scored 1-1.5 in match play to help the Lions.

With the loss, the Lions dropped to 5-2 for their fall season. The schedule for the spring is yet to be set.