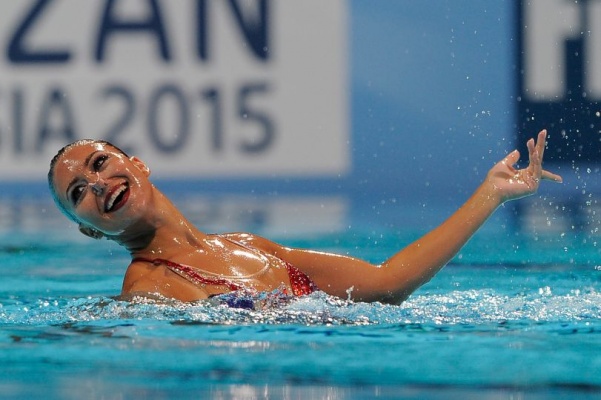 When she was 6, Reem Abdalazem El Bossaty heard music playing at the pool in a clubhouse in Cairo, she said.

After seeing some girls swimming “beautifully to the music,” Abdalazem decided she wanted to become a “water dancer.”

Abdalazem was a collegiate national champion with Lindenwood and a star in the Egyptian national synchronized team.  On Nov. 20, Abdalazem was named the assistant coach for the U.S. National Team.

The U.S. national head coach Andrea Fuentes had been speaking with Abdalazem about becoming an assistant coach for some time before the U.S. synchro swimming association filed a formal request.

As for the upcoming Olympics, Abdalazem has high expectations for the United States.

“Team USA has not been qualifying for the Olympics in the past eight years, and my job is to bring them back on the map again,” Abdalazem said.

The first time Abdalazem represented Egypt, she was 13 years old. She stuck with it until she turned 23, participating in competitions such as five World Championships and two Olympic games.

While representing Egypt, her biggest personal achievement was finishing in 1st place in the COMEN Cup in 2007. During the 2012 Olympic games, Abdalazem and her team achieved 7th place, a goal they had set before the tournament started.

“It was a beautiful, happy moment for all of us,” Abdalazem said.

After high school, Abdalazem started investigating options of coming to the United States to study and do synchronized swimming at the same time.

“I wanted something different after high school and I was craving a challenge,” Abdalazem said.

After competing at a World Trophy in 2009, a tournament organized by FINA (International Swimming Federation), Lindenwood’s head coach reached out to her.

Abdalazem reminisced on her favorite things about being part of Lindenwood’s synchronized swimming team.

“All the amazing people I’ve met, the different cultures I got to be acquainted with, the coaches I’ve learned from and the friends I have come to make was and still is my favorite memory at Lindenwood,” Abdalazem said.

When Abdalazem graduated in 2014, she started working as a media communications representative at a financial company while being a part-time assistant coach for Lindenwood’s synchro team. The following year, the program’s then-head coach Lori Eaton handed over the program to Abdalazem to take full charge as the head coach.

Working with 33 athletes across three teams while being a student pursuing an MBA degree, Abdalazem was challenged and put up to the test.

“It was an extremely rigid experience that was challenging not just for me, but for all of my athletes at the time as well, but it really shaped me into the person and coach I am today,” Abdalazem added.

Now that Abdalazem is on a new path coaching the US synchro team, she remembers her time at Lindenwood fondly and wishes the best for the current team.

“To work towards their personal goals while being the best versions of themselves, and to always remind themselves of why they’re doing what they’re doing, to have a purpose, to learn as much as they can from everyone around them, to remember that there are always good days and bad days, and to be true to themselves,” Abdalazem said. “Being a driven, wholesome athlete is a state of mind.”