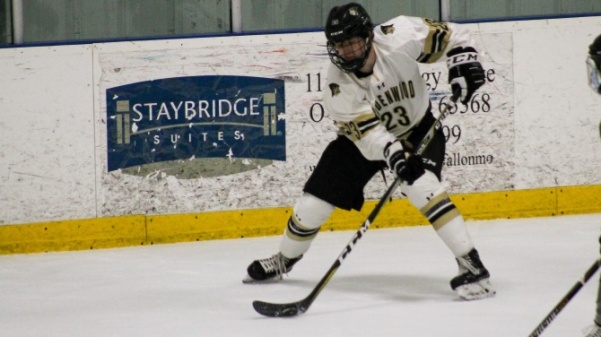 Zach Mitchell during a home game against Arkansas.
Photo by Kayla Bakker.

Lindenwood men’s ice hockey is off to a historic 16-0 start this season, and a big part of the team’s offense is sophomore forward Zach Mitchell, who has 18 goals.

The team’s offense overall has been solid, with players hitting the back of the net 99 times while only allowing in 22. Twelve of their first 16 games have been decided by three or more goals.

Mitchell has been one of Lindenwood’s biggest offensive spark plugs. He currently ranks fifth in the American Collegiate Hockey Association with 27 points, which includes 9 assists. He has scored in 10 of Lindenwood’s 16 games, including five multi-goal games.  His season high was four goals in a 15-0 win against the University of Arkansas.

Mitchell said hockey was his first love. He started to learn the game when he was about 5 years old.

“I remember playing ‘learn to skate’ at Johnny’s IceHouse in Chicago, Illinois,” Mitchell said. “My parents were telling me about how one of my buddies was trying out hockey. I decided I wanted to do that too, and that’s how it all started.”

Mitchell said he started playing on travel hockey teams at age 10, and competed in places like Michigan, Minnesota and Canada. He and his family have all made sacrifices to keep his hockey career going.

“They would spend countless hours driving every day, taking time away from their everyday life and making sacrifices for me, which is awesome, and I’m very thankful for,” he said.

Playing on a travel team at such a young age was a good way for him to grow up and learn about life, Mitchell said, and it has helped him with other challenges he’s faced.

“I think you grow up pretty fast and mature pretty quick,” he said. “I wouldn’t trade it for anything.”

Coming out of high school, Mitchell said several schools recruited him, but Lindenwood  Head Coach Rick Zombo was able to talk him in to being a Lion.

Mitchell said he is thrilled about the team’s win streak and how the offense has been performing this season.

“I have a lot of good players playing around me so they make it easy to score goals,” he said. “We’re all scoring pretty much[…] Everyone from last year is improving. Our first, second, third and fourth lines are scoring.”

Sophomore goalkeeper Cooper Seedott said players like Mitchell have made the difference in the team’s overall performance this season.

“Him having the ability to score and the people around him to set him up, if not him setting them up,” Seedott said. “The lines we have seem to be working well.”

Mitchell said the win streak has made for an electric atmosphere in the locker room.

“Everyone’s happy,” he said. “Friends getting along, respecting each other, having a good time, dancing around the locker room a little bit, getting excited. We’re all having fun, enjoying our time here playing hockey, doing the thing we love to do every day.”

The Lions look to keep rolling as they move into the second half of their season, and they have their sites set on a national championship.

“As long as we stay the course and just keep working hard every day and doing the right things on and off the ice, I think we could accomplish that,” Mitchell said.

Mitchell and the Lions will be back in action on home ice at 7 p.m. Friday, Jan. 11, when they take on Ohio University.