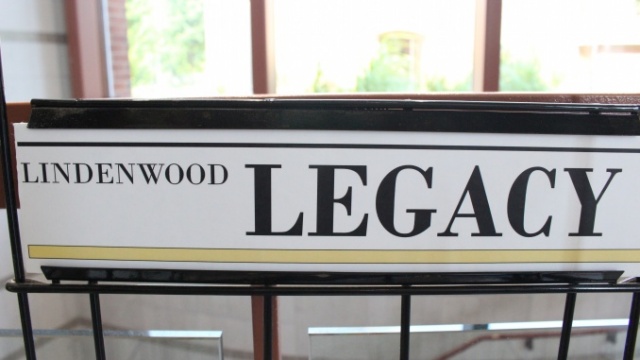 A newsrack which was used to distribute the former Legacy campus magazine and newspaper.

Lindenwood administrators have agreed to fund a print student magazine this spring.

“The School of Arts, Media, and Communications (AMC) is excited to welcome a new print publication to our journalism program,” said Joseph Alsobrook, dean of the AMC school. “I look forward to the first edition, and I know it will be as awesome as the students who produce it!”

The new magazine, now called Link, will feature similar content as the Legacy magazine but with a “fresher design.”

“I really feel like creating a print magazine is a different experience as far as journalism goes,” editor-in-chief Mitchell Kraus said. “We are excited to get this opportunity to create something we are proud of.”

The magazine formerly known as Legacy began printing in October 2017 and featured award-winning stories on sexual assault on college campuses, mental health awareness for college students and a story on the 20th anniversary of Lindenwood’s only homicide.

In June, administrators announced their decision to stop funding the publication for reasons including monetary concerns and a plan to move toward converged media. The publication’s staff doubted the reasons presented, believing the magazine lost funding due to censorship concerns and asked the College Media Association to investigate the issue.

An investigator with CMA interviewed students and administrators at the university over a period of several months. During that time, students tried to come to a compromise with administrators for another print issue of the Legacy or a re-branded version of the magazine. The talks resulted in administrators agreeing to allow the students to publish a print magazine.

The first edition of Link will be available mid-April.