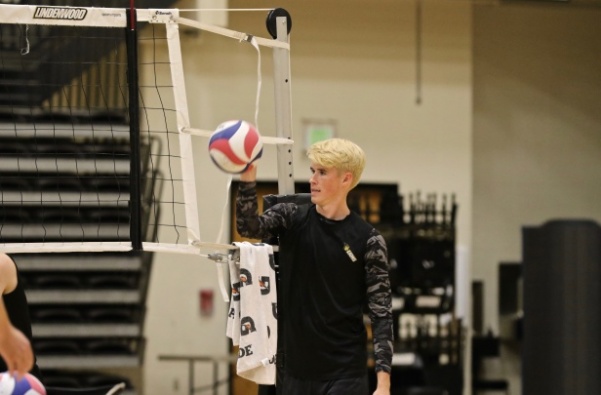 Adam Brewster passes the ball during practice in September 2018 at the Hyland Arena.
Photo by Merlina San Nicolás.

The Lindenwood Lions are ready to start competition this season with their first match on Friday against the University of Charleston in the Hyland Arena at 7 p.m.

According to the Lindenwood Lions website, in the 2018 season the Lions finished 9-16 overall and 3-11 in MIVA conference matches. The two athletes that stood out were Adam Brewster, a senior captain and fashion design major, and Connor Hipelius, who was named the preseason All-MIVA honoree for the 2019 season.

Brewster was the All-MIVA setter and ranked fourth in MIVA rankings as well as being one of the top setters of the NCAA. Last season, Brewster counted 63 assists, the third-highest in NCAA matches and a Lindenwood record.

He has set new goals for this season, like reaching 3,000 assists and making the All-Conference team.

“Closing out my career in Lindenwood with something I can really be proud of,” Brewster said. “It’s been a bumpy road with 3 surgeries in the past two years and it would be great to finish out here on a high note.”

Following their match against Charleston, the Lions will face the University of California-Los Angeles in another home game on Saturday at 7:30 p.m. UCLA is the runner-up for last year’s NCAA championship match.

After that, the Lions will participate in the “Grow the Game Challenge”, with three matches in Tennessee and two in Pennsylvania, facing teams including Saint Francis University and Penn State.

The Lindenwood Invitational will start on Jan. 31 against Long Beach State University and will end on Feb. 3, hosting teams like McKendree, Lourdes and Quincy.