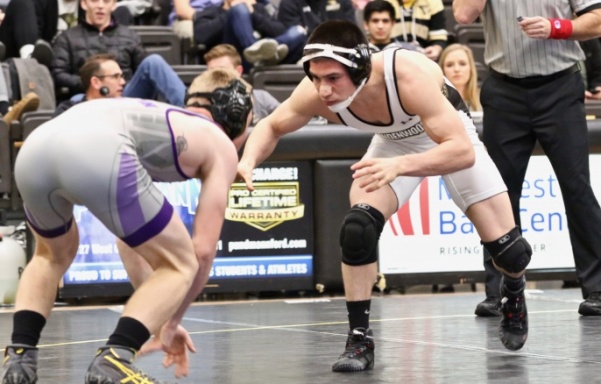 Edison Brooks fighting against Nathan Wutherlich from Truman State. Brooks won the fight in less than two minutes on Tuesday night at the Hyland Arena.
Photo by Merlina San Nicolás.

The Lindenwood men’s wrestling team had an eventful Tuesday night at the Hyland Arena with a strong victory over Truman State and the signing of an honorary captain.

The Lions won the encounter with six pins against the Bulldogs and four forfeits by Truman State.

According to the Lindenwood Athletics website, Bini is a member of Team IMPACT, a non-profit organization that works to improve the quality of the lives of kids with threatening and chronic illnesses. Bini was also celebrating his 11th birthday along with his twin brother Nathan.

Edison Brooks and Tagge McNutt pinned their opponents in the first two minutes of their respective matches. Brooks said that despite having a great showing, he wished he participated in the second or third period.

“I like to know that I am improving from different situations and positions while wrestling,” Brooks said. “Winning by pin in the first period doesn’t show those scenarios.”

Brooks added that winning in front of the home crowd was one of the highs of the night.  Other athletes that earned victories were Jorge Guerrero, Jared McKindley, Tanner Hitchcock and Marshall Green.

The Lions will travel to Nebraska this weekend to face Colorado State-Pueblo, Nebraska-Kearny and Colorado School of Mines at the Midwest Duals.