TEDxRitenourRoad encourages people to “Speak Up” 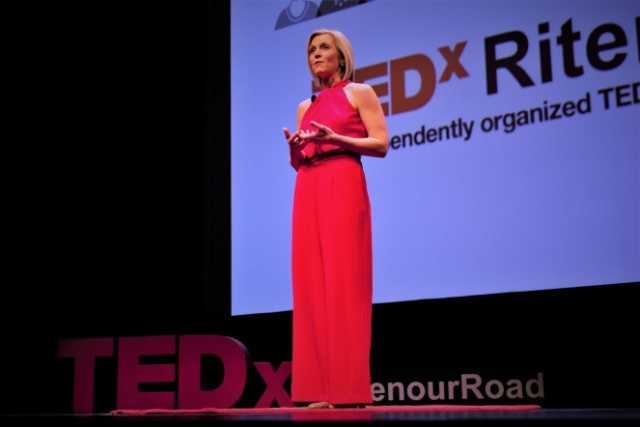 The event was originally planned to be held at Lindenwood University in the J. Scheidegger Center but was ultimately canceled by the administration who cited “a lack of sponsorship/funding.”

The event was co-sponsored by Pride St. Louis and Transparent and featured six of the original speakers that were slated for the Lindenwood event as well as a Ritenour High School speaker. A painting by artist Terry Willits was also raffled off and raised $500 for Transparent.

The talks were divided into two sections: “Raising Awareness” and “Dissolving Stigma.” Each section consisted of three talks, a few videos, and a drag performance by local drag king Dickie Rebellion.

“The issues that the six talks delve into are topics that are not only accessible to college-age students but are often issues that they encounter,” Tedx lead organizer and Lindenwood professor Dr. Heather Brown-Hudson said on the talks. “I feel like college age students, in particular, could take away from this whole event a new way of thinking about their everyday experiences.”
I Spy Something White
Dr. Stephanie Afful opened the event with her talk, “I Spy Something White.” An associate professor of Psychology at Lindenwood, Dr. Afful’s talk highlighted the importance of being racially aware. She said that the way white people can accomplish this is through W.A.V.E.S, which stands for witnessing, action, voice, empathy, and being a student.

Dr. Afful believes that the first step to being racially aware is to witness, or essentially recognize, your own race and the privilege that may come with it. The next step is to take action by being an advocate for minorities. People can use their voice by opening up dialogues about race.

“Silence is compliance,” Dr. Afful said in her talk. She says we must be empathetic and listen to the experiences of others and then be a student and learn from those experiences. “We have a social responsibility to talk about race,” she said.
Word is Bond
DuEwa Frazier’s talk “Word is Bond” explained how teachers can use hip hop to bring up issues of social justice in the classroom. Hip hop as a genre often focuses on social justice issues like violence, incarceration, and drug abuse. Both a published writer and a teacher,

She said that teachers should have students analyze hip hop songs in class to explain what the artist is trying to say through their lyrics. Frazier says that by using hip hop in the classroom, it will help students to visualize and verbalize the issues surrounding them.

The Dangers of Being Siloed
Journalist, author, and filmmaker, Gina Keating gave a talk titled “The Dangers of Being Siloed” which explained how readers often become trapped by “online information silos.” Keating explained how this worked by giving some background on predictive algorithms. Netflix started using a movie matching predictive algorithm called Cinematch in 2006 to suggest movies to their customers based on previous movies they had watched. Since then, other online companies have begun to use their own predictive algorithms to suggest content to their readers that they know the reader will enjoy.

She also cites over 200 cultures worldwide that accept more than two genders and says that the issue of gender diversity in America is something we can overcome. “I think the issue of gender diversity is very misunderstood,” she said, “it’s important to think about gender diversity in a more open way so we can be more inclusive to people and more compassionate.” Dr. Garwood also explains that this issue affects all of us even if a person is not transgender because we are customers, students, teachers, employers, and coworkers. “We all have the ability to see people clearly…to recognize and affirm them,” she said.
The Silver Dollar Approach to Preventing Black Adolescent Suicide
Following Dr. Garwood was Dr. Narketta Sparkman-Key who is a professor of human services and program director at Old Dominion University in Virginia. Her talk titled “The Silver Dollar Approach to Preventing Black Adolescent Suicide” explained how families need to take it upon themselves to discuss mental health in the black community. Dr. Key explains that there is a stigma within the black community that prevents many black youths from getting the mental health attention they need.

“Culturally we don’t go to counselors,” Dr. Key said. Many families in these communities believe white therapists would be unable to culturally understand the struggles of black children, and many black patients have faced racial prejudices when they did reach out for help.

Dr. Key said that the first step towards better mental health is to change the way communities view it. “We’re trying to create a culture of change, especially when we’re talking about mental health amongst the black community,” she said. To do this, she says we need better education in culturally appropriate ways to deal with issues of mental health and she also believes that this starts with the parents. Dr. Key hopes that by talking about suicide in the black community, it will help to change the stigma of mental health.
The Problem with Band-Aids on Bullet Holes
Laura Enk, a Lindenwood graduate and former rugby player, closed the event with her talk “The Problem with Band-Aids on Bullet Holes.” Enk takes on the topic of campus sexual assault by explaining her experience with it. Enk was raped when she was a freshman at Ferris State University in Michigan. She said the topic of sexual assault is marginalized and that it’s a topic that needs to be discussed through sexual assault prevention courses in high school.

Enk explains that rape stems from bad cultural expectations of men and women. “The pressures of masculinity…it is becoming toxic and it is at the expense of women, unfortunately,” she said. This creates an environment where sexual assault preventions come in the form of policing women instead of teaching men how to attain proper consent. Enk also mentions that many women aren’t living freely

because of the many preventions that they are expected to take in order to stay safe. She said that “living in fear shouldn’t be the standard.”

“I think all the talks were well crafted and delivered from a strong point of humanity,” Emcee Jen Spellazza said when asked about the talks. “I think [for] a lot of young people it’s good to see the modeling of what is to truly do what is kind instead of what is right.”

At this time, there are no plans for a TEDx event at Ritenour High School or Lindenwood University for 2020.

Editor’s Note: In a previous version of the article, it was stated that DuEwa Frazier’s speech indicated that hip hop music focuses on single-parent households. However, that statement was incorrect. This has since been corrected.