Synchronized swimming is ‘ahead’ of the game this season 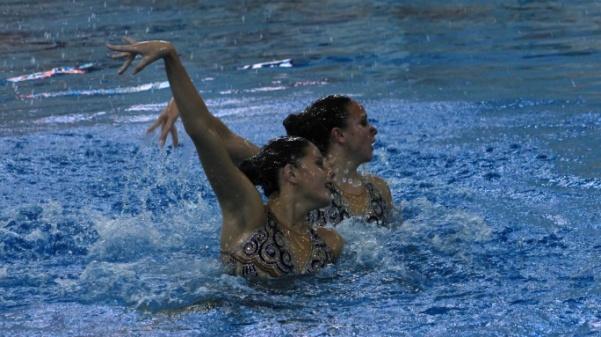 Watch the video to see how synchronized swimmers get ready for competition.

The synchronized swimming team dominated their only home invitational, competing with their full routines in all events, on Jan. 26 at the St. Peters Rec-Plex.

Head Coach, Mikayla Francese said the fact that the team completed their full routines in solo, duet, trio and team for their first meet was a huge win.

“Instead of doing the full three to four-minute routines, we’ll do just the beginning, just to show everybody we haven’t trained it quite yet, but we’re ahead in our training schedule [this season], so we’re able to do everything,” Francese said.

The Lions won the team routine against the University of Illinois, by 30 points with a score of 75.4667. Granted, the Lions did have nine competitors, while Illinois had four.

Seniors Kyra Hoevertsz and Marialaura Villisana both competed in solos, scoring 78.5 and 74.7, respectively. Hoevertsz’s solo score was the top of the competition.

For duets, freshman Maria Lluc Bonnin and Hoevertsz earned the top score of 78.3667, from their artist impression and sassy take on “Toxic” by Britney Spears.

Next up, the team takes on Ohio State University on Feb. 2, which is top in the nation and one of the Lion’s biggest competitors.

To prepare, Francese said the team needs to work on height and sharpness to perfect routines since the team is ahead of schedule. But most of all the Lion’s need to develop a strong mental game.

“[We need] the mental game to go up against the top people in the United States and to go out there and perform in their home pool and show them our routines and be able to show them very well,” Francese said.

The synchronized swimming team picks a theme every season. This year it is “United.”

“We coaches believe that teamwork and being united comes first out of everything else,” Francese said. “What we do from there and in the pool comes from being that tight-knit group.”

And the Lions will need exactly that to advance to regional championships come March.