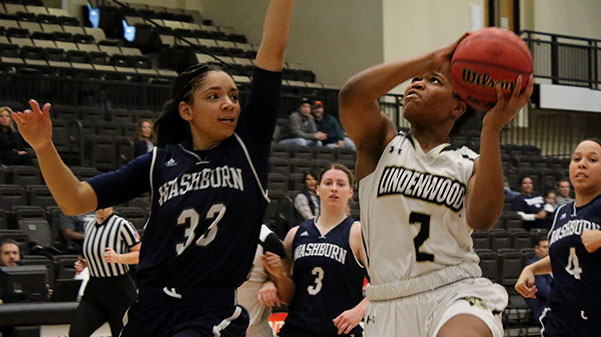 In a file photo from 2017, Lindenwood's Charisse Willams tries to get a layup past Washburn's Denesia Smith at the Hyland Arena in St. Charles.
Photo by Walker Van Wey.

The Hornets set the tone early, outscoring the Lions 28-17 in the first quarter.

The second quarter was closer than the first, but the Lions were unable to make a dent in the lead. The Hornets ended the first half leading 48-32.

For the Lions, it was junior Kallie Bildner leading the charge with 15 points and 8 rebounds. Senior Lexie Moe added 8 points and 7 rebounds. Only three other Lions were able to put points on the board in the half.

In the second half, it was much of the same for the Lions. They were outscored 22-16 in the third quarter. The only quarter the Hornets did not outscore the Lions was the fourth, where the Lions only outscored them by two.

Lindenwood had the slight edge in bench points, outscoring the Hornets’ bench by a score of 13-11. The Hornets controlled all other facets of the game. They outscored the Lions 16-11 in second-chance points, 36-20 in points in the paint, and held the biggest advantage in points off turnovers, leading 30-4.

The loss is only the fourth of the season for the Lions and brings their record to 13-4 overall and 7-3 in MIAA conference play.