Review: Disney on Ice celebrates stories in honor of over 100 years 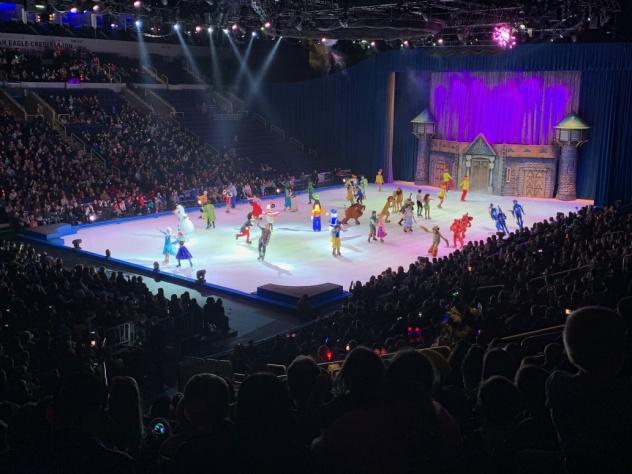 All of the characters in Disney on Ice during the last number of the show on Saturday, Feb. 2 at the Enterprise Center in St. Louis.
Photo by Megan Courtney

The Enterprise Center was full of small children dressed up as their favorite Disney characters, along with flashing wands and other toys to accessorize Saturday night.

As soon as the lights went down, the flashing colored wands lit up the room, like the flicker of stars.

Disney on Ice came to the Enterprise Center over the weekend, and many of the original characters like Belle, Cinderella, Snow White and Jasmine were present, along with newer ones like Anna, Elsa and Tiana.

The show opened with Mickey, Minnie, Goofy and Donald. Donald and Goofy wanted to make a movie, but weren’t sure what of. Mickey and Minnie suggested that looking back at some of Disney’s “most popular” stories may inspire them.

A short musical number from “Pinnochio” was up first, followed by the 2016 sequel to “Finding Nemo,” “Finding Dory,” where Dory travels across the world to find her parents.

After “Finding Dory” and “Pinnochio,” characters from the movies “Cinderella,” “The Little Mermaid,” “The Princess and the Frog,” “Aladdin,” “Rapunzel,” and “Snow White” made their appearances on the ice, waving to the crowd while children danced in their seats.

The wildly popular 2013 movie “Frozen” was up next to get its short musical story – and it included some of the songs from the movie, such as “Let It Go,” “For the First Time In Forever” and “Do You Want to Build a Snowman?”

Characters from “Toy Story” during Disney on Ice on Saturday, Feb. 2 at the Enterprise Center in St. Louis. Photo by Megan Courtney.

After a short intermission, everyone’s favorite talking toys made their way to the ice, and some of the older audience members were clapping and singing along to “You’ve Got a Friend in Me,” from “Toy Story” with Woody and Buzz Lightyear.

“Mulan” was up next, and that number included the battle that defeated the Huns and saved all of China.

After it was over, all of the characters came out, waving and skating around the ice to a standing ovation.