Review: Panic! At The Disco lived up to “High Hopes” of concertgoers 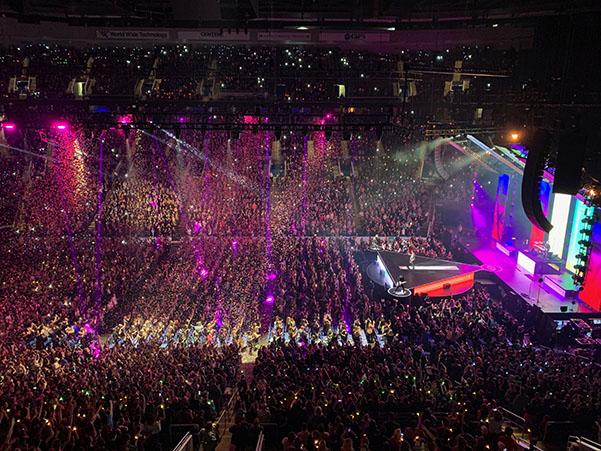 Panic! At The Disco at the Enterprise Center on Feb. 5, 2019.
Photo by Megan Courtney

Fans of all ages wearing their favorite Panic! At The Disco shirts filled up the Enterprise Center Tuesday night to see the man himself, Brendon Urie.

St. Louis was the second sold-out Missouri stop on the “Pray For The Wicked Tour,” the first one being on Feb. 2 in Kansas City at the Sprint Center. The last time Urie was in St. Louis was on April 5, 2017 for the “Death of a Bachelor Tour.”

The show began with Urie popping out from under his triangle-shaped stage. The lights went dark and cell phone flashlights began lighting up the arena.

Urie isn’t one to interact with or talk much on stage, but his high energy dance moves and impressive vocal range are two things that kept the crowd entertained for his near two-hour set.

After “Dancing’s Not A Crime,” Urie slowed the show down just a bit to perform “This Is Gospel,” a song about former Panic! Band member Spencer Smith and his personal battle with alcoholism and addiction.

Shifting the mood slightly, Urie headed into the crowd for “Death of a Bachelor” to do the “death walk” where he interacts with fans on the floor and the lower level seating. The “death walk” still went on as planned despite numerous complaints from Urie about being kissed and licked without consent at past shows on the tour.

The next two songs involved a Urie and a piano that was suspended in the ceiling and glided through the air. One was a song that his mother taught him how to play growing up, “I Can’t Make You Love Me” by Bonnie Raitt, and the other, “Dying in LA” off of his most recent album “Pray for the Wicked,” which is about people arriving in Los Angeles to pursue their dreams, only to end up unsuccessful.

Urie covered a song from the movie “The Greatest Showman,” followed by “Girls/Girls/Boys” in which the room was filled with rainbow paper hearts being held against phone flashlights in support of LGBTQIA+.

“If anyone is questioning their belonging, just know we accept you here,” Urie said after the song while wrapped in Pride flags that people had thrown on the stage.

The second to last song of the show was “the one that got it all started for Panic!” according to Urie, which was “I Write Sins, Not Tragedies,” and the last song of the night was “Victorious.”

A playlist of Urie’s most popular songs on Spotify can be found by clicking here.