Shonrock going to court to fight for his job 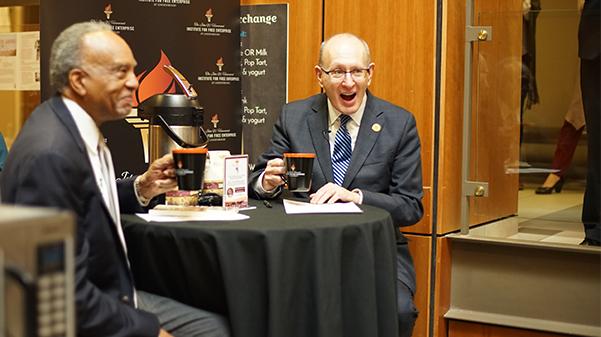 Michael Shonrock, the day before it was announced that he was suspended with pay, shares a cup of coffee with Roots Java CEO and President Clifton Taulbert.
Photo by Mitch Kraus

Michael Shonrock is going to court to fight for his job as Lindenwood University president after he was placed on paid administrative leave earlier this week.

Shonrock’s attorney, Jerry Dobson, filed a temporary restraining order and an injunction on Wednesday against Lindenwood University and Chairman of the Board of Trustees, J. Michael Conoyer. It states that they acted “beyond the scope of their authority” in putting Shonrock on leave.

A hearing is set for 2 p.m. Thursday in front of Circuit Judge Michael Fagras at the St. Charles County Courthouse.

Shonrock said Tuesday he was given a letter from Conoyer that said he was being placed on paid leave, effective immediately. The letter further stated Shonrock could not be on campus except for his home and could not communicate with university staff, or have access to any university systems.

A board meeting to discuss Shonrock’s fate is set for 12:30 p.m. Friday in the J. Scheidegger Center.

According to the application for an injunction, which was filed in the St. Charles County Circuit Court, the bylaws of the university require that a “duly constituted meeting” must be held to take a vote to place someone on leave.

At a minimum, notice has to be given to all executive committee members, and they need to be given an opportunity to attend either in person or by telephone, the petition says.

The petition alleges that this did not happen, and says that the action taken by Conoyer “grossly exceeds” the powers given to the board chair.

Conoyer could not be reached for comment, but in an email sent to faculty Wednesday, he said the board is “moving deliberately and thoughtfully according to institutional policies and practices” in regards to Shonrock’s suspension.

Dobson said since Shonrock is not allowed anywhere on campus, he can’t attend Friday’s board meeting “where his future is determined.” So he’s asking the court to rule that Lindenwood can’t keep Shonrock from attending the meeting.

The petition provides an overview of the events leading up to Shonrock’s suspension.

It began at an executive committee meeting on Jan. 23 at Conoyer’s home. The petition alleges that the committee went into “executive session,” and that Shonrock was excluded from the remainder of the meeting.

Shonrock learned that members of the committee planned to present a motion to terminate him at the next board meeting. On Feb. 1, Shonrock and Dobson got confirmation of the plan to fire him.

On Monday, Feb. 4, Dobson got authorization from Shonrock to contact board members, and got permission from Lindenwood General Counsel Troy Perdue to write a letter to board members. But later that day, Dobson got a phone call from Perdue saying that he had been instructed to rescind permission for Dobson to write to the trustees.

Soon after, according to the petition, Dobson got an email from attorney Neal Perryman, with the Lewis Rice law firm, saying that he represented Lindenwood, and that Dobson could not contact any board trustees directly.

At 8:30 a.m. on Tuesday, Feb. 5, Perdue hand delivered a letter to Shonrock telling him he had been placed on administrative leave. Perdue escorted Shonrock out of his office, and Shonrock went directly to his university provided home on campus.

Conoyer’s letter does not cite any legal authority for his or the board’s action, and does not say why Shonrock was placed on leave, according to the court document.

Dobson said Lindenwood has to have a process, and as far as he could tell, there was no process.

“We believe the decision is going to harm him if he’s not able to attend the meeting on Friday,” Dobson said.