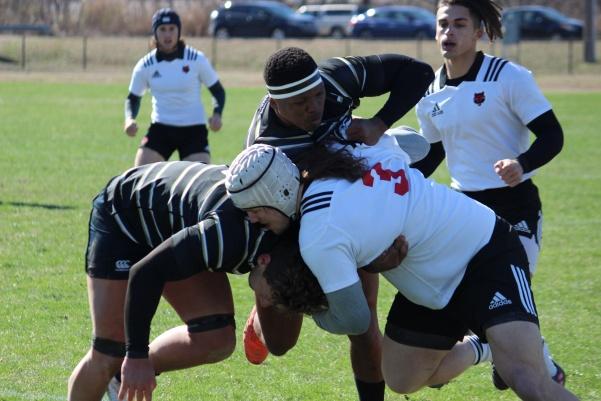 Wesley White and Ani Mteto attempt to score for the Lions in their match against Arkansas State in February.
Photo by Tyler Ingram

After a 10-1 start to the season, Lindenwood men’s rugby lost their first match since October 26.

Arkansas State beat the Lions by a score of 29-23 in Jonesboro Saturday afternoon.

Despite the loss, Head Coach Josh Macy said his team’s performance was decent.

“We looked alright in parts and managed to camp out in the attacking end of the first half, “he said. “We had to settle for three instead of scoring tries, and that seemed to hurt us down the line toward the end of the game.”

Senior wing Cristian Rodriguez said the team learned a lesson on how to compete on the road. He said this match will help them down the conference play stretch this season.

“We showed some very good signs in today’s game and I think our subs brought some great energy and really showed us the potential we have going into the week,” he said.

Macy said that the weather prevented the team from practicing outside this week before the game. Instead, they practiced inside while lifting in the weight room and doing various workouts in the wrestling room.

“Defensively, we slipped one too many tackles and struggled to get our alignment correct. We’re looking forward to correcting this as we get more time outside.” he said.

The Lions face the St. Louis Bombers on Friday at Hunter Stadium.