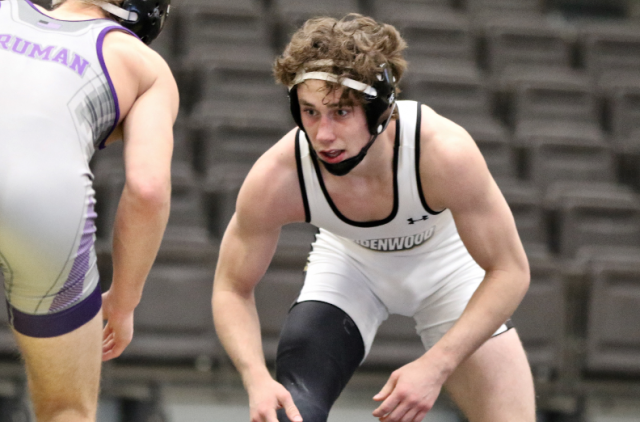 Tanner Hitchcock prepares to approach his opponent during a match at Hyland Arena on Jan. 15.
Photo by Merlina San Nicolás.

The No. 6 Lindenwood wrestling team fell to No. 12 University of Central Oklahoma 9-27 on Sunday at the Hyland Arena.

The lone Lion to have an undefeated season was Carlos Jacquez, who defeated his opponent Tanner Cole 9-4 in the very first match of the day.

Tanner Hitchcock was the second Lion to step in the arena against Broncho Noah McQuigg and was close to tying the match when a takedown happened right at the final buzzer, losing 6-4.

The last Lion to compete was Colton Clingenpeel who finished just short from winning his match with a 17-11 score. The Bronchos held the lead the entire encounter.

The Lions are now preparing to compete for the Regional which they will host on Saturday, Feb. 23 at the Hyland Arena. The Regional will help decide who travels to the NCAA Division II National Championship in Cleveland, Ohio.

“As a team, we are starting to get geared into the championship mindset with regionals coming up,” Hitchcock said. “We are starting to just perfect all the little aspects of our own wrestling styles.”

Last year, the entire wrestling team made it to the National Championship, so expectations are high.

Hitchcock said the coaches are “getting us to believe we all have that capability.”

The Lions finished their regular season 12-5 overall and 3-2 in conference matches.