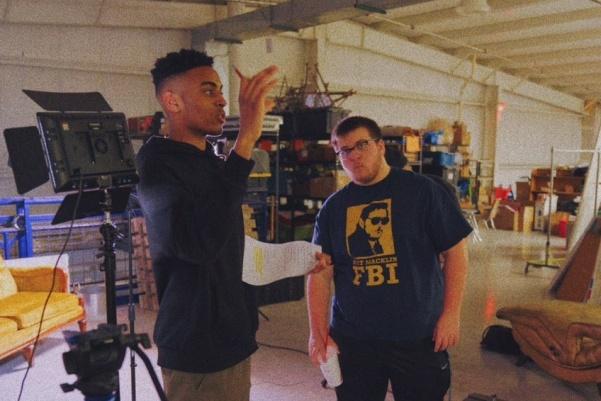 Keaton Jones, a sophomore mass communications student from Dallas, never expected to obtain the following he has now. Jones releases his videos in episodes; each episode focuses on one artist, giving them a platform to express themselves and get their word out.

“I don’t know where it’s going to go, but so far it’s going good,” Jones said.

Jones’ passion hit him all at once. He didn’t have much experience, but after hours of conversation with his cousin, who works for HBO, Dorm Room Entertainment was born.

His cousin told him, “You can just get started if you just try.”

But after he learned the “in and outs of video production,” and took a class at school, he shot his first video: “EP 001 | STREET KATZ.”

“After my first video, people were saying, ‘Dude make more of this,’” Jones said. Jones glowed vibrant words of excitement and passion.

With the creation of Dorm Room Entertainment, Jones teamed up with six other Lindenwood students where they increased their production quality.

They now shoot the videos in an art studio in St. Charles– not in a dorm room at all.

“Absolutely not,” Jones said. “I love this name so much, but our location is not in a dorm room.”

“At the same time, the age range is from like 18 to 70,” Jones said. “My mom shares most of my videos. She had one that had over two hundred comments on her Facebook page.”

It’s not just his likeness and video production quality that draws in viewers. His presence on social media ropes in fans and artists. Though Jones may consider himself a host for a cool YouTube channel, he is a social media influencer. It’s how he markets.

Jones said he didn’t even want to be the host in the beginning, but he really got into watching interviews. That’s how he “learned to master the interview.”

To this day, he still watches interviews to make his own better.

Jones said he has several verified artists he’s working on doing interviews with. He’s been working with Waka Flocka Flame’s manager since June 2018 trying to get an interview with him.

When Waka Flocka came to Lindenwood in 2019, Jones was invited on stage during the concert.

“I have a really good feeling that the interview is still going to happen,” Jones said. “His manager said after the concert to ‘be ready to interview Waka when he comes back.”

“My dream is to work is advertising someday,” Jones said. He wants Dorm Room Entertainment to be big. He isn’t stopping any time soon. His passion is discovering underground rappers and artists.

To make Dorm Room Entertainment go where he wants it to go, Jones said, “all it takes is one person.”