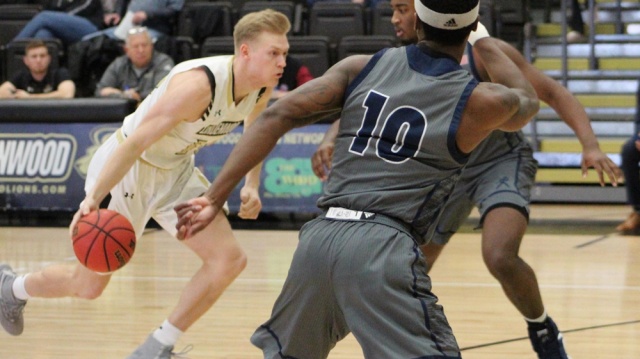 Forward Chandler Diekvoss during the game against Washburn on Feb. 21. Diekvoss and guard T.J. Crockett each scored five points in the game.
Photo by Caleb Riordan

The Lions’ hot streak came to a screeching halt Thursday afternoon against Washburn.

It was a wire to wire victory for the Ichabods, as they led from the opening tip.

The Lions were quickly down 5-0 before a three-quarters court pass that came from senior Adam Pohlman to senior Brad Newman, who laid it in to get the Lions on the board. The Ichabods led the Lions 9-2 at the first media timeout.

The Lions were able to get within five on two separate occasions in the first half, but ultimately the Ichabods lead ballooned to 15. They led 39-24 at the half.

The Ichabods were led by sophomore Tyler Geiman, who had nine points and seven rebounds at the half. Freshman Sevon Witt and senior David Salach each added eight points.

For the Lions, as usual, it was Newman who led the way in scoring with nine points. Sophomore T.J. Crockett and senior Chandler Diekvoss both added five. They were ice cold in the half, shooting 25 percent from three, 32 percent from the field and about 56 percent from the free-throw line.

The Lions were unable to gain any steam in the second half. The Ichabods went on a 6-0 just 1:30 into the second half that forced Head Coach Lance Randall to take a timeout.

The Ichabod lead grew to as high as 25.

The Lions shuffling rotation and some gritty play from Crockett was able to light the smallest of sparks in the half. Crockett caught an alley-oop and was immediately followed by a three from junior Cameron Scales. This brought the crowd to life and cut the Washburn lead to 15, but with only 4:11 left in the half, it was all but too late.

“I felt like we played a step behind for most of the first half,” Randall said. “Washburn shot the ball very well from three and manhandled us around the rim.”

The Ichabods outscored the Lions 36-28 in the paint.

Ichabod senior guard Javion Blake ended up leading all scorers with 24 points. Geiman, Salach and Witt were all able to score in double digits. Geiman filled up the stat sheet with 15 points, 10 rebounds and seven assists.

Newman ended up scoring a team high 17 for the Lions. Crockett was right behind him 16 points and added six rebounds. They stayed ice cold in the second half, shooting 22 percent from three and about 37 percent from the floor.

Next for the Lions, they have a little bit of a break before facing the University of Central Missouri Wednesday, Feb. 27, at 7:30 p.m. in the Hyland Arena.