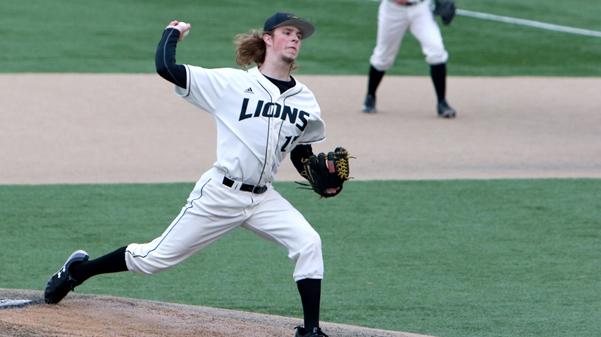 In their second series at the Lou Brock Sports Complex this semester, the Lions defeated Washburn University Friday and Saturday before losing Game Three Sunday.

Lindenwood Baseball looked to make it above the .500 mark for the first time this season.

In Game One Friday afternoon, Washburn struck first, scoring an unearned run in the top half of the first inning.

The Ichabods would hold their one-run lead into the bottom of the third inning, when Kolby Schulte singled with one out and remained on first base with two outs. Then, Mitchell Krebs came through with a two-out RBI double in the right-center field, scoring Schulte from first to tie the game at 1-1. Schulte then singled again for the Lions with two outs in the bottom of the fourth.

Washburn threatend in the top of the fifth inning, placing two runners in scoring position with no outs. However, Tyler Cassmeyer quickly shut down the opportunity for the Ichabods, retiring the next three hitters, two of which came via the strikeout. Cassmeyer exited the game after six innings, striking out six batters, and not allowing an earned run.

Eric Hipp logged the final three innings on the mound for the Lions, securing the win for Cassmeyer and also picking up his first save of the season.

Game Two went just as well for Lindenwood as Game One did.

Washburn quickly took the lead in the first inning with an RBI single with two outs. The Lions put together a strong second inning as all of their runs came with two outs. Schulte drove in the tying run on a single up the middle. Krebs put the Lions in front with a two-RBI single to center field, making it a 3-1 game.

The Ichabods tied the game at 3-3 in the top of the fourth, then regained the lead in the top of the fifth with a run on a sacrifice fly. The Lions fought back in the seventh inning that started with a leadoff walk by Krebs. Miller hit a double down the right field line that put two runners in scoring position with no outs. Krebs scored on a wild pitch and Miller scored on a single by Bryce Beckmann.

Fischer hit a single to left field and ended up scoring in the same sequence after the Ichabods committed two fielding errors. Beckmann and Fischer crossed the plate to make it 7-4 in favor of the Lions after seven innings. Miller added two insurance runs with a two-RBI single up the middle, giving the Lions the 9-4 lead. Michael Cessna was lights out in his 2 2/3 innings of work as he tallied three strikeouts, which granted him his second victory of the season.

The Lions would close out the series against Washburn on Sunday where they would lose Game Three by a score of 12-2.

The Ichabods scored two runs on two hits and one error in the first inning to take a quick 2-0 lead. The Lions responded in the bottom of the first as Miller and Schulte succeeded on the double steal attempt to cut the deficit to one. The game began to get away from Lindenwood as the Ichabods tacked on three runs in the second and one more in the third to take a 6-1 lead.

Dominic Revetta scored in the bottom of the fourth to keep the Lions in striking distance with plenty of game left to play.  Washburn added two more runs in the top of the sixth on one hit and one error.  The Ichabods closed the door in the top of the ninth with four more runs to make it a 12-2 final.  Lindenwood committed six errors on the day as four runs went unearned for the pitching staff.

After a great showing at home, the Lions seem to be back on track after a rough first two weeks. Their record improves to 7-8 on the year. They will face Emporia State on the road next weekend.