Gymnastics tie for last home match of the season 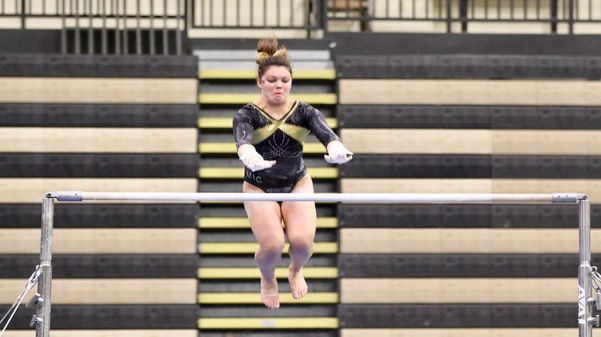 Ryan Henry performs on the bars for a 9.755 score and a 39.125 in the All-Around to lead the Lions on Sunday afternoon at Hyland Arena.
Photo by Merlina San Nicolás

The Lindenwood Gymnastics team reached their highest score yet of the season on Senior Day at Hyland Arena on Sunday afternoon.

The Lions tied with the University of Illinois at Chicago for first with a score of 195.560 and also scored their highest season on the beam and floor.

Lindenwood’s top athletes were Courtney Mitchell on the bars with a score of 9.825 and Andavea Alexander on the beam with 9.875. Kyndall Blaze, Taylor Colwell and Ryan Henry tied for 9.875, while Jordan Boogerd and Aleah Turon scored 9.775 on the vault.

Henry also led the All-Around for the Lions with a score of 39.125.

According to Lindenwood Lions website, the team scored 48.650 on the vault, the fifth-highest score of the season, and 0.100 points above their season average.

The Lions also scored 48.800 for their third-best season score on the bars and a new season high of 49.000 on the beam, led by Alexander’s score. The Lions also beat their floor high with a total of 49.200 points.

Samantha Borges, Maya Davis, Kristin Morgan and Alexander were presented with gifts by teammates for the Senior presentation.

The Lions will be heading to Cape Girardeau for the Missouri State meet on March 10.