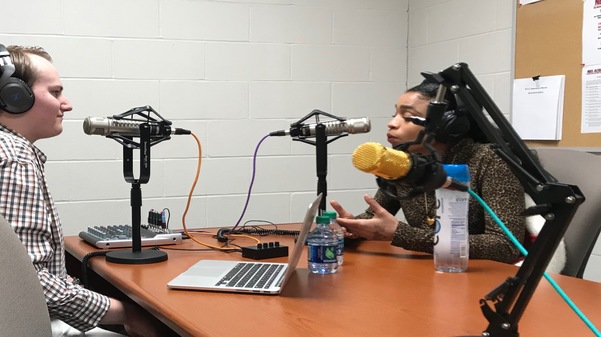 Victoria was interviewed by Joseph Mesenbrink, a Lindenwood student, and D.J. for the radio station. Mesenbrink asked questions about Victoria’s newest album, “Silences,” which came out Friday.

“I learned to enjoy the process [of making the album] more than I did with the first one,” Victoria said.

Victoria said a lot of her passion comes from her grandmother. She said that her grandmother worked very hard raising children and being a wife, but that it wasn’t until she was older when she found her love for painting.

Victoria and her band are performing at Off Broadway, where they have played once before on a previous visit to St. Louis, on Tuesday night at 8 p.m.

Her band, who were waiting around their van parked on campus, were hanging out outside talking and waiting for Victoria so they could get ready for their concert.

“I’ve got family in St. Louis, and I actually went to Truman State,” Pete, one of the band members said. The rest of the band is from Nashville.

“[Atlantic Records] takes care of us,” the band said.

The band also gave a shoutout to Little Rock, Arkansas, where they said they have an “oddly large” following.

Victoria said her concert Tuesday should be a “communal experience.” She wants everyone to feel together, regardless of where they came from.

Her “gothic blues,” as Mesenbrink called it, has a way of bringing the crowd together.

Give her new album, “Silences,” a listen here: