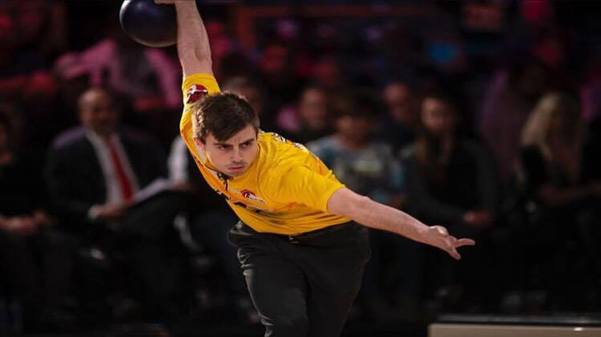 Kyle Sherman during the telecast on FS1 of the PBA Cheetah Championship.
Photo provided by Columbia300

Sherman qualified for the TV finals after 60 games and was the number three seed for the show. Sherman had to battle against Matt McNiel, a professional bowler from Minnesota, in the first round.
Sherman was able to string 11 strikes in a row for a score of 290, just 10 pins away from a perfect 300 game and defeated McNiel 290-152.

In the second round, Sherman defeated Rhino Page 229-204 to advance to the finals. At this point, Sherman needed to win one more match to win his first ever professional title.

In the finals, Sherman had to face number one seed Dick Allen, a professional bowler from South Carolina with six professional titles under his name.

The final game started, and Allen was able to string five strikes in a row while Sherman struggled to knock down ten pins in one shot. As the match progressed, Allen struggled but he had enough advantage to defeat Sherman 234-195.

Sherman said on his Instagram account that “the hunger is there, the time is now, and I’m ready to do this,” as he moves forward to the following PBA tournaments.

Sherman graduated from Lindenwood University with a bachelor’s degree in accounting, was a three-time collegiate All-American, and won the 2014 Intercollegiate Team Championships. Sherman was also a four-time academic All-American and former Junior Team USA.

Sherman is currently a full-time professional bowler travelling throughout the US to compete and has a YouTube vlog with former Lindenwood lion Brad Miller.