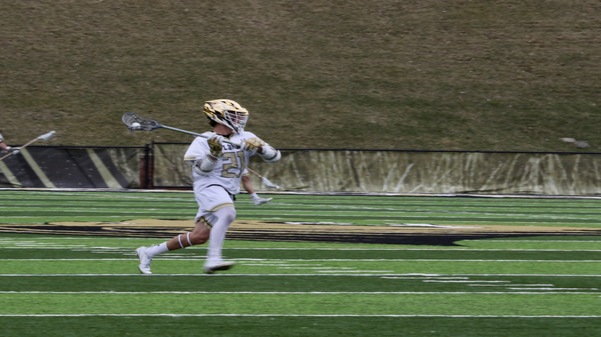 No. 21 Carter Collins cradles towards the opponents' goal on Saturday afternoon at Hunter Stadium.
Photo by Merlina San Nicolás.

The Lindenwood Lions fell to the University of Indianapolis Greyhounds 11-6 at the Harlen C. Hunter Stadium Saturday afternoon.

As soon as the encounter began, the Greyhounds were able to score in the first 40 seconds of the match. Six minutes into the game, they scored two more points to build up an advantage over the Lions.

But the Lions didn’t give up and started to control the match, scoring three times in a row to cut the Greyhounds’ advantage. By halftime, the Lions were trailing by just two points.

Garret Brunsvold scored in the opening of the second half, cutting the opponents’ advantage to bring the score to 6-5.

Leonard Jones scored one more time with seven minutes left of the game, but the Lions couldn’t cut the advantage the Greyhounds had built with five points in a row.

According to the Lindenwood Lions website, Colin Domek and Carter Collins scored two goals each for the Lions.

Landon Schuster made 12 saves in goal for the Lions with five first-quarter saves. Alex Eubank led the defense with three caused turnovers.

The Lions are 7-3 overall and will host their last five-game match on Friday at 6 p.m. against the Wesminster College Griffins at Hunter Stadium.