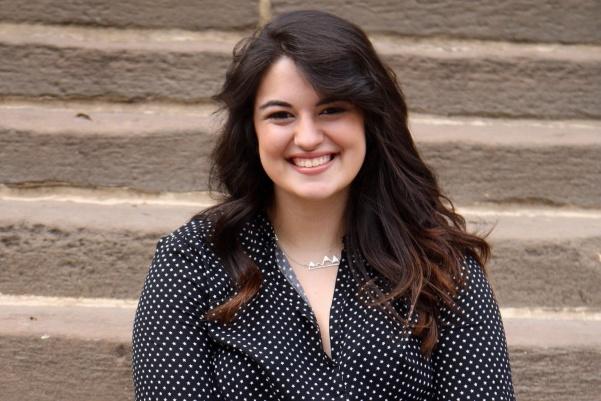 Out of 296 candidates nationwide, Lindenwood senior Kristen Wilhelm was chosen as Delta Sigma Pi’s National Collegian of the Year.

According to Lindenwood’s website, the award is the “highest honor a collegian member can achieve in the organization and is given to the one outstanding member of Delta Sigma Pi who has demonstrated the values and ideals of the fraternity.”

Wilhelm, who has been with the fraternity since her first semester at Lindenwood, said she is currently the vice president of chapter operations.

“I am in charge of taking [meeting] minutes, supplying national news to my chapter, recording attendance reports and making sure that the chapter is submitting all the forms necessary to get credit from our national office,” she said.

Wilhelm said that the award is given to someone who “goes above and beyond for their chapter, participates in DSP events hosted by other collegian and alumni chapters, works within their community serving the world around them and has a vision on how to make the fraternity better.”

In order to be nominated, Wilhelm said the nominee must give a speech to the chapter on “why you feel like you would be a good choice,” and she was nominated alongside other fraternity member Sierra Johnson, Emanuel Chon Sin and Megan Paul.

After speeches are given, a discussion is held among chapter members, and then a vote is casted. Once nominated, an application must be filled out, and then it’s reviewed by award committees and votes are casted at that level.

Wilhelm said she was “surprised to be nominated again.”

“I was nominated last year and won the Gateway Regional Award and the South Central Provincial Award,” she said. “It’s not unheard of to be re-nominated for another chance, but you have to be able to show that you have done more to improve your application.”

When a nominee wins the national award, Wilhelm said, they are called by the board of directors.

She said she took a call at 7 p.m. and was “slightly freaking out the entire day just waiting for 7 p.m. to come.”

“I was trying not to get my hopes up too high, but it was a little hard,” she said.

After “what felt like hours” of being on hold, Wilhelm said she was greeted with “Hello, everyone, if you don’t recognize my voice, this is Tricia Smith, your grand president,” and that’s when she knew she had won.

Wilhelm said she then “immediately jumped out of my chair and silently screamed.”

She described the experience as an “emotional rollercoaster,” saying that she was excited, nervous and joyous all-in-one.

“Overall, this award is a complete dream come true,” Wilhelm said. “It is something that very few people get to experience, and I didn’t think coming from such a small, new chapter that I would be able to achieve this.”

As a requirement of winning the award, Wilhelm will serve a two-year term on the National Board of Directors of Delta Sigma Pi.

Wilhelm is graduating in May with business administration degree with emphasis in human resource management and marketing.