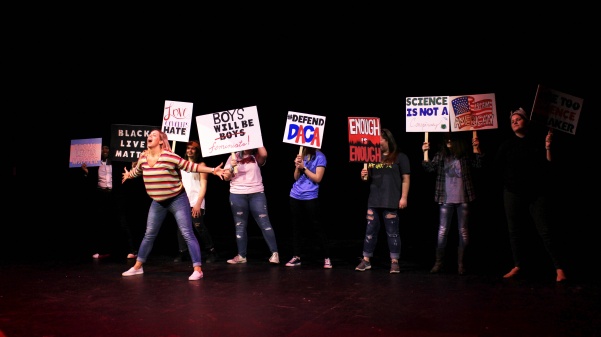 Heather Brown-Hudson, also known as Savvy Blanc, will perform in several acts during the drag show.
Photo by Lindsey Fiala

This year’s annual Gender Sexualities Alliance drag show, Show Up and Show Out, has one of the largest groups of freshmen participation since the drag show began, according to Heather Brown-Hudson.

The show consists of 15 acts and does not have a theme, according to Ethan Miller, also known as Mercury Poisoning.

“I think this year they just decided to make it a little more open [to] just do your best drag,” Miller said.

Miller will be performing two acts during the show and has performed in every drag show Lindenwood has put on, despite no longer being a student.

“I do [drag] professionally now, and I still come back to do it which is really nice to me that they invite me back because they don’t owe me anything,” he said.

Lucy Couture and Dickie Rebellion, both whom do professional drag, will be performing in the show.

Miller fell in love with drag when he performed in Lindenwood’s first drag show.

“[My favorite part about drag] is the ability to turn into somebody completely different and pretend to be somebody different,” he said. “It’s [also] a good way to release any type of emotion really.”

“When I was in high school and college, I did theater; I love musical theater and I love performing,” she said. “And I love drag. This literally gives me the opportunity to collaborate with my students and to be a part of the LGBTQ community. I feel like I’m helping the community to kind of increase visibility on campus as a faculty member.”

Brown-Hudson is also happy about the strong freshmen presence in this show.

“They are excited, and they’re motivated and our president, Brooke Parker, is graduating and she’s going to pass the presidency down to one of our freshmen,” she said.

Audience members are encouraged to bring money to toss at the performers throughout the show. All donations will be given to TransParent.

According to Brown-Hudson, TransParent St. Charles is the local chapter of a national organization. They support the parents and the families of transgender and gender non-conforming children.

“It’s a family organization, but it’s really focused on supporting the families, to help lift up the parents to give them the tools and resources, the language and the knowledge to help support their children,” she said.

Show Up and Show Out is being performed in the Emerson Black Box Theater in the J. Scheidegger Center on Tuesday, from 7 p.m. to 9 p.m.

Admission is free, but space is limited to 180 seats, so performance entry is first come, first served. Free t-shirts will be handed out upon entrance.

Editor’s note: An earlier version of the story called the Gender Sexualities Alliance the Gay Straight Alliance. This has since been corrected, and we apologize for the error.