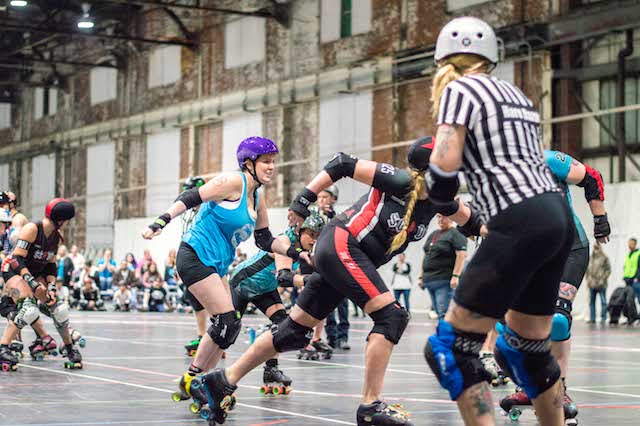 Scoring points for the St. Chux Derby Chix, Sarah Ryerson, aka Rainbow Crash (No. 125), rushes past the defense for the Midstate Mayhem Roller Derby on March 2 at Olympia Athletics & Events Center in St. Charles.
Photo by Andria Graeler

Underneath the glow of fluorescent lights, roller skates click against a worn white floor.

Flashes of red and black uniforms blur together as the St. Chux Derby Chix practice a jam, one of the main components of gameplay.

“Get lower, look up!” a teammate yells from the sidelines as the women push against each other at Great Skate in St. Peters.

Around the outer edges of the rink, clusters of “fresh meat,” or rookies, practice basic skills like skating, stopping and recovery tactics for falling safely. They move in jerking motions as they hold out their arms to the sides for balance.

A few red-faced women hinge at the waist with their hands on their knees, still breathless after completing 27 laps in five minutes, roughly estimated as a mile. Completing the test, known as the golden rule of derby, means players are game-ready.

The start of the season in March held extra significance—it marked a decade of the St. Chux team’s existence—and they’re always looking to add new members.

“We welcome anybody regardless of their skating experience even if they’ve never been on skates in their life,” said Melissa Asbridge, this year’s team captain. “If you come to see this and be like ‘I want to do that!’ we will teach you how.”

Rules of the game

The Derby Chix’s schedule consists of eight games and one tournament; it runs from March to September. Their competition involves teams from Illinois, Kentucky and Tennessee. This year, the team paired down the schedule and chose nearby opponents to take the pressure off all the new girls. But, according to Asbridge, they’ve traveled as far as Arizona.

The players participate voluntarily, and each works their own unique day job, from school bus driver to bar owner, while still practicing derby for two and a half hours every Tuesday and Thursday night.

Games have two 30-minute periods, consisting of bouts called “jams,” which last two minutes, unless called off by referees.

The jammers wear nylon helmet covers emblazoned with a star to differentiate their status in the rink. The jammers may pass their duties off to a teammate in the “pivot” position with a “panty swap.” The pivot then takes the helmet cover and converts into a jammer.

Derby names come about either one of two ways. Either you pick it yourself, or it’s given to you.”

Despite the gear, bumps and bruises and even more serious injuries still occur. According to a 2017 pilot study done by the University of Missouri-Kansas City School of Medicine, “the risk of serious injury in the sport of women’s flat track roller derby is significant,” and showed that injuries to ankles, knees and even the upper thigh are most common.

In addition to the gear, every team member wears a black and red jersey with an SCDC logo, mimicking the ACDC logo with a pinup girl separating the letters.

How a name is born

On the back of each fitted top, the players wear bold numbers for identification, and underneath the numbers, they each wear a special nickname referred to as their derby name.

“Derby names come about either one of two ways,” said Asbridge, aka #smashtag. “Either you pick it yourself, or it’s given to you.”

Asbridge got her name from her father, who she said was “all about” cool derby names after watching derby in the late ’70s and early ’80s. As a self-proclaimed “computer nerd” who works as an implementation analyst installing computers and software in prisons, Asbridge’s nickname of #smashtag stuck. 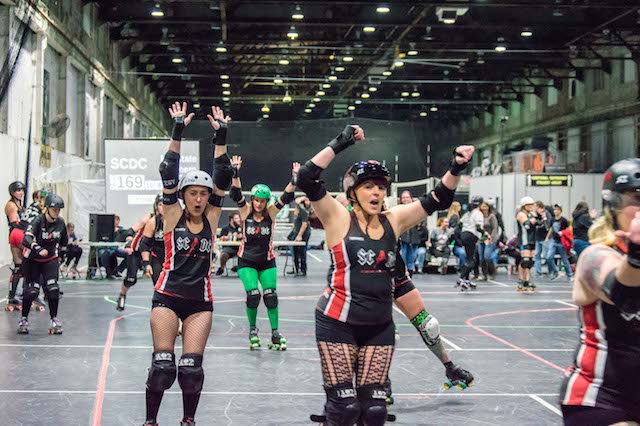 The St. Chux Derby Chix celebrate loud and proud as they win their first home bout on March 2. Photo by Andria Graeler

Other derby names on the team include Squirrel, Doc HaulAway, Wretched Gretchen and Rainbow Crash.

The woman behind Rainbow Crash, Sarah Ryerson, found inspiration from one of her favorite kids shows, “My Little Pony,” when picking her signature style.

In an episode, one of the ponies, Rainbow Dash, finally achieves her fictional sports dreams. After she crashed epically in her training, the other ponies started calling her Rainbow Crash.

“And she thought it was making fun of her, and she felt super horrible and at the end of the episode, she realized everyone had a silly nickname they got in their rookie season,” Ryerson said. “And I was like, that’s totally me. I’m Rainbow Crash.”

And thus, a nickname was born.

Getting your derby legs

Along with their one-of-a-kind monikers, each player brings her own story about how she got started playing derby.

Melanie Craig, also known as Squirrel because of her love of squirrels, saw roller derby games in junior high but never pursued it. As fate would have it, her flash mob group performed at the intermission of a roller derby group years later. Craig knew she wanted to get involved, and her background as an ice hockey player helped jumpstart her derby career.

“It’s kind of funny because there’s things I’ve learned to do on wheels that I haven’t learned how to do on skates, and vice versa,” she said.

The team still considers Craig “fresh meat” even though she’s been with them for three years because she is still working on passing all of the nearly 30 tests she needs to qualify for gameplay.

Asbridge began her sixth season this year and got her start in derby a month before her 40th birthday.

A girl that Asbridge used to babysit continually asked her to play derby, she said.

“It was like my 40th birthday present to myself,” she said. “I finally got the nerve to go do it.”

“She was like ‘Hey, you were a rink rat growing up! You know how to skate, you should come check out my derby team!’” Asbridge said. “So I went to practice my first practice, and I fell in love with it even though I had to crawl from my car to my house because I used all these muscles that I didn’t know I was never using.”

According to the St. Chux Derby Chix website the team welcomes people of all genders, ages, shapes and sizes into our league, and the current roster ranges in age from early 20s to late 40s.

The other girls echo the same sentiments, telling of their love of the community within the sport and the importance of inclusivity.

“When I first started, I started for myself,” Ryerson said. “I just wanted to do it for me, and I quickly realized it’s a community. It’s a community of women who love each other and care for each other, and I was a little surprised, but I love it.”

For Ryerson, being able to get physical during practice and games with her teammates and to have them still cheering her on and wanting her to succeed “is just one of the most beautiful things in the world.”