Last of its kind: Missouri’s second oldest bar, home to last ‘cocked hat’ bowling alley in US, is 5 blocks from campus 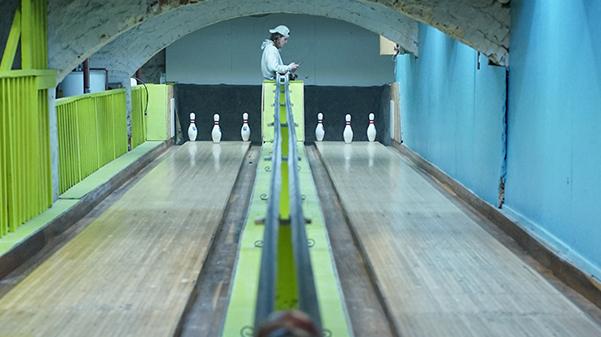 Pinsetter Brendan Sportsman stands at the back of the lanes beneath St. Charles' oldest bar.
Photo by Mitchell Kraus

Take a wrong turn on the way to the bathroom at The Corner Bar, and you’ll find a trapdoor leading to a unique place in bowling history.

In the basement of the brick building, situated five blocks from Lindenwood’s campus, is the only surviving cocked hat bowling alley in the United States.

Cocked hat bowling, which originated in England, is played with three pins on narrower and shorter lanes than standard “tenpin” bowling, and balls that are only 5 inches in diameter and have no holes.

The game got its name from the way bowlers used to wear their hats when playing, said Jason Bibb, the bar’s current owner.

Visitors who descend the narrow stairs beneath the brick bar at the corner of First Capitol Drive and Sixth Street will find a pair of lanes underneath two stone archways.

Bibb said as recently as 20 years ago, about five cocked hat lanes existed in the United States, mostly in the northern Midwest,.  But when he took over the bar in 2005, it was the only one left.

“To this day, the Bowling Hall of Fame recognizes us as the only one in the United States,” he said.

Bibb said he reconditions old wood from other bowling alleys for the lanes, and there is also a counter made from part of a bowling lane in the basement.

At the front of the lanes is a basin Bibb said bowlers call the “holy water.” Before grabbing the ball, they dip their fingers in it and wipe their hands on a towel hanging from the ceiling.

On the walls, beside messages signed by patrons from years past, bowling memorabilia and alcohol logos, is a sign reading “Please! Remember to tip your pinsetter.” At The Corner Bar, the pins are replaced, and the lanes are oiled manually.

Pinsetter Brendan Sportsman, 17, said that although “sometimes the bowlers bowl too hard and the pins go flying,” the job is fun and easy.

Bibb said bowlers banter with the pinsetters, who add a nostalgic element to the setting.

At 154 years old, The Corner Bar is the oldest bar in St. Charles and the second-oldest in Missouri.  It was originally constructed in 1860 as part of a military school founded by the brother of the Rev. Addison Schenck, who was then president of Lindenwood Female College.

Bibb said the bottom floor was built as stables, but it is unknown if horses were ever kept there.  The main floor contained teachers’ living quarters, and the upper floors (now apartments) were classrooms and dormitories.

After the Civil War ended, the building became a saloon, and the bowling lanes were added around 1875.

Bibb said pieces of the building’s history remain, from the spot where ice blocks were dropped into the basement from horse carriages before refrigerators, to the building’s original St. Charles-kilned bricks.

A fifth-generation shoemaker, Bibb acquired the bar with his sister, Libby.  Many Corner Bar bowlers and patrons predate him. Regulars who have died have plaques on the bar.

Instead of advertising, Bibb said, The Corner Bar thrives on its location, reputation and local pub atmosphere.

“If you make your locals happy, … they bop around to other places, so they spread the word,” he said.  “My best advertisement is literally this stoplight and my chalkboard.”