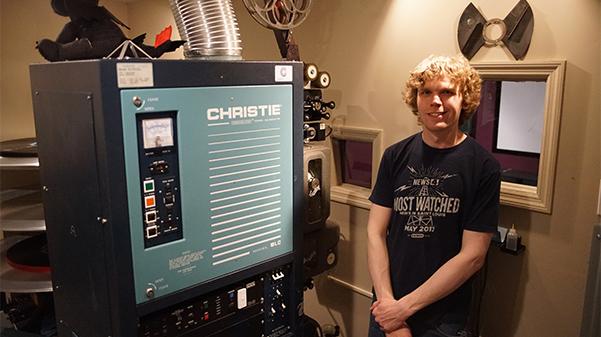 Tom Ostertag, class of 2013, poses next to his movie theater projector on the top floor of his converted school building in St. Charles.
Photo by Mitchell Kraus

Ostertag has been collecting audio-visual equipment for as long as he can remember. His parents encouraged his interest by buying antique AV equipment for him as birthday presents when he was growing up. Ostertag showed off his collection during a recent tour of his 26,000 square-foot school building.

Inside the front doors of the three-story St. Charles building is a stairwell leading to the upper and lower floors. The building was first constructed in 1915, with multiple additions throughout the years.

At the top of the first flight of stairs is a large video screen showing off a slideshow of artwork. Ostertag’s mother, Mary, is a painter, and his sister Ella, who is also a Lindenwood alumna, works with ceramics. The largest room on the main floor is an art studio for them, filled with pottery on tables and floral paintings on the walls.

A room across the hall holds part of Ostertag’s AV collection. The first thing that catches your eye is a large rack of editing equipment, painted a light blue that looks like the same shade as old hospital scrubs. It is a relic of the way things used to be, he said, when editing was done on physical tapes instead of a computer.

“I get most of [the collection] by just volunteering to take it,” Ostertag said. “I know people, and when places are getting rid of old equipment, I will ask for it instead of them just throwing it away.”

Most of the collection comes from TV news stations, large churches and professional sports arenas. Ostertag says the rapid advancement of technology in the last 20 years has created a lot of quickly outdated equipment.

“Most TV studios switched to digital around the year 2000, and then they upgraded again when HD broadcast became a thing around 2006,” Ostertag said. “All of this equipment that was only 5 years old was suddenly outdated.”

The rest of the room is filled with large broadcast cameras. Ostertag said that new models of the cameras can cost more than $100,000, and Ostertag has at least a dozen older ones. On a shelving unit against the wall sits stacks of film spools for use in the movie theater upstairs. Computer parts, tripods and a few old televisions fill out the rest of the space.

The remainder of the first floor is rented out by a church congregation that meets in the space that used to be the school’s gym.

Upstairs, seven cats roam around the rest of Ostertag’s collection. A living room and kitchen space make up the largest room.. Big open windows negate the need for light fixtures.

Next door to that is what Ostertag calls his “museum room,” where the oldest pieces of his collection sit. There a television with a round screen from the1950’s, a movie theater projector that dates to the ’30s, and three Edison branded phonographs are in working order.

Across the hallway is the main feature of the building: a fully functioning movie theater that can project film and digital movies. All of the equipment in this room is second-hand. A film copy of “War Games” was loaded into the projector at the time of the tour.

The space is about the size of a large classroom, but the speakers in it are the size of refrigerators; big enough to go in a concert venue.

Ostertag said he has no desire to move anytime soon. In fact, he hopes to continue to grow his collection.