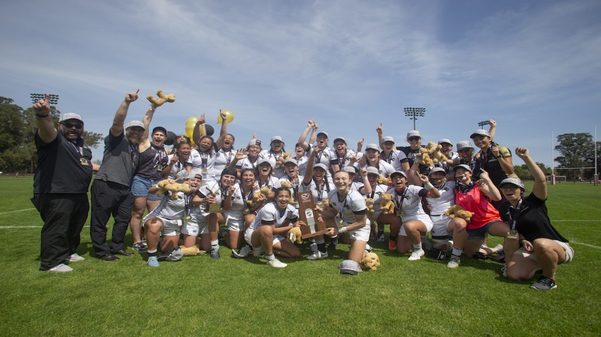 The Lindenwood women's rugby team in Palo Alto, California, after winning the National Championship back to back.
Photo by Alex Ho from USARugby.org

Lindenwood’s women’s rugby team and cheerleading squads had stellar performances in each of their National Championship competitions over the past weekend.

On April 7, the women’s rugby team repeated as the D1 Elite National Champions after trailing Life University by 14 points in the first half. The Lions ended defeating Life 36-19 at Steuber Stadium in Palo Alto, California.

“Going into the national championship, we were excited but nervous,because the hard part is not to win but keep doing it in the next years,” Caring De Freitas said.

Four minutes into the match, Life had the advantage and kept the pace for the majority of the first half, but the Lions came back with De Freitas on the lead. Soon the Lions offense was on the lead.

“We had a small lead after the first half and we knew Life was coming harder for the second half, but when we were in the locker room we were looking at each others’ eyes and knew we weren’t playing like ourselves and needed to wake up, we said we wanted and had worked hard to win,” De Freitas said. “This is not the moment to give up.”

De Freitas said that “once we walked out of that locker, we had the energy we needed to win the tournament, we pushed each other so hard that that’s what helped us win.”

Teresa Bueso Gómez scored in the final moments of the match to get the win. Bueso Gómez was also named Most Valuable Player of the championship.

The Lions closed their 15’s season but continue with the sevens as they focus on the next competition in Gainesville, Florida, for the Tropical Sevens Tournament on April 19-20.

The cheerleading program won its fifth consecutive national championship at the 2019 NCA/NDA Collegiate Cheer and Dance Championships in Daytona Beach, Florida, on April 4.

The Lions began with a tough routine, earning a 90.9 score with some deductions, which was enough to advance to the finals with a three point margin above the second place squad.

Coming into the finals, the Lions scored an overall of 91.0625 to win the Large Coed Division II Championships. According to the Lindenwood athletics website, the Lions had perfect scores in Crowd Leading and Collegiate Image and earned at least nine points in every other category, including jumping with a 9.8 and 9.3 in pyramids, tosses and standing tumbling.

The cheerleading program had other three squads competing and all of them advanced to the finals. Lindenwood took second in the Small Coed II with a 94.90. Blinn College took the win with a 95.42.

The cheerleading squads will hold its tryouts on May 3 and 4 at Hyland Arena.