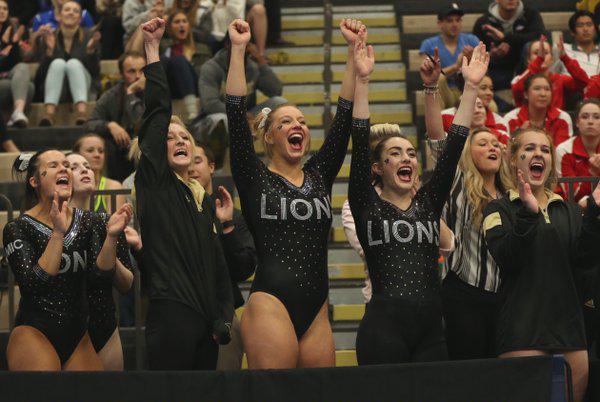 Members of the Lindenwood gymnastics team celebrate after their teammate completes a floor routine in the team finals.
File Photo by Carly Fristoe

In the past five years, the Lindenwood gymnastics team obtained its third USA Gymnastics Collegiate National Championship title in Bridgeport, Connecticut, on Saturday.

The Lions started the competition on Friday by qualifying and posting a team score of 194.800 to earn second place just .025 points behind Air Force.

The competition started with the vault event, led by Jordan Boogerd, who tied for first with 9.800 points.

On the bars event, Katie Bailey recorded her career best of 9.825 to finish third overall. Bailey was also the top scorer for the Lions on the beam with a 9.825, another career best. Bailey finished third in the event.

Andavea Alexander and Ryan Henry posted a 9.800 on the beam and tied for fourth place. The Lions finished with an overall score of 48.900.

On the floor, Aleah Leman scored a 9.825 and finished fourth overall. As a team, the Lions finished with a score of 48.000 for the floor routines.

The Lions that advanced to the individual finals on Sunday were Alexander, Bailey, Boogerd, Henry and Lemon, all placing in the top five in each of their events.

Going into the finals, the Lions posted a team score of 196.375 which included a new high-record 49.500 for the program during the last rotation of the beam, securing the national title.

In second place was the University of Illinois at Chicago with 196.025. Bridgeport and Air Force were third and fourth.

On the floor, the team finished with a score of 49.025 and Kyndall Blaze, Taylor Colwell and Breanna Franklin 9.800 and 9.850, respectively.

Aleah Turon’s led the Lions in the vault with 9.825 while Courtney Mitchell paced the Lions on the vars with a 9.850.

On Sunday, the five Lions that qualified individually stepped to put on their best performances. Bailey tied third for the bars event while Alexander finished sixth.

On the beam, Henry tied for third, Bailey tied sixth and Alexander tied for ninth place. Leman finished eleventh for the floor routine and ninth for the vault. Boogerd took sixth in vault.

To top the competition off, all five Lions made first and second All- American teams in their respective events, capturing five first team All-American recognitions overall.

This marks the end of the season for the Gymnastics team who say goodbye to seniors Alexander, Samantha Borges, Maya Davis and Kristin Morgan.