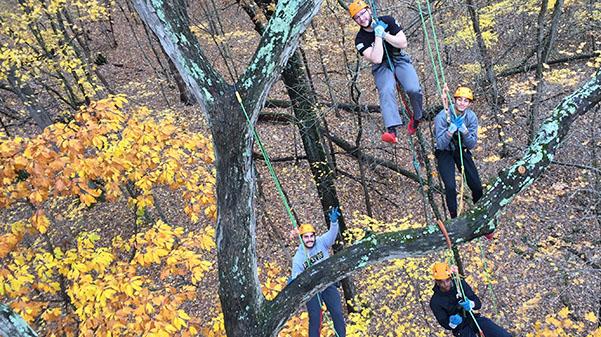 Lindenwood students in the Recreational Tree Climbing class hang from a white oak tree at the Wyman Center in Eureka, Missouri.
Photo provided by Jon Richard

Lindenwood students can learn how to climb trees with professional equipment in a one-credit elective that mixes recreation with education.

Originally, Recreational Tree Climbing students scaled a tall linden tree near the gazebo in the quad, but now they climb off campus, said Jon Richard, who teaches the course.

Richard said he is a rock climber who has traversed routes from Arizona to the Alps. In 2009, he founded Vertical Voyages, a company that teaches tree and rock climbing.

The course, which now has 10-12 students each semester, started about seven years ago when a former dean suggested it would make a good elective.  Richard said no other colleges in Missouri offer a tree climbing course, but he has taught rock climbing at St. Louis Community College-Forest Park.

This semester, the late-start course was taught April 5 and 6 at the Wyman Center in Eureka, where students climbed trees ranging from 60 to 95 feet.  It consisted of an outdoor lab and a one-hour lecture the evening before.

Before scaling a tree, students learn about tree biology.  Richard said although he checks that trees are safe before students climb, students also learn how to inspect a tree for hazards, such as dead branches and power lines.

Students get lines in the tree by throwing up a thin cord, which they use to raise a rope into the tree. To protect the branch from the rope rubbing against the bark, climbers use a sleeve called a cambium saver. 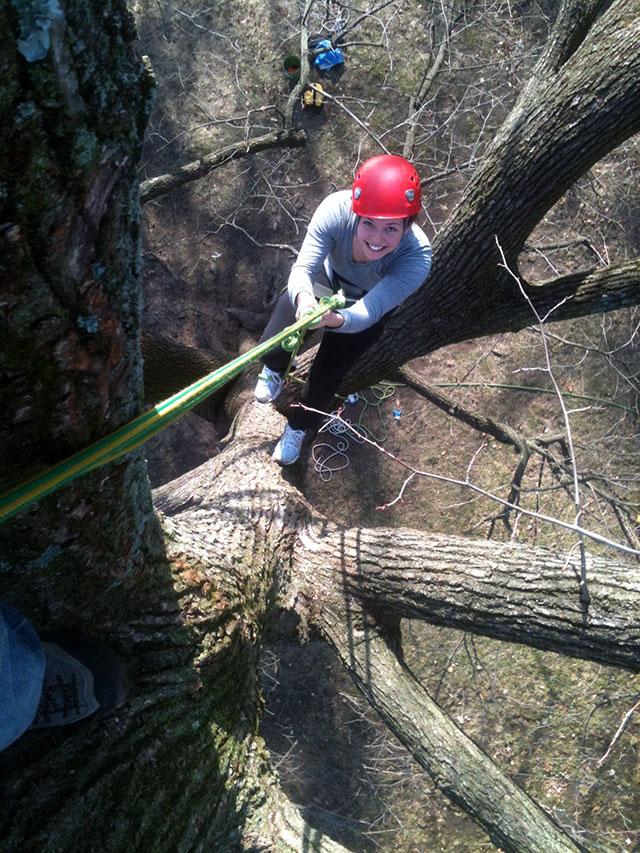 Tiara Ellison,  a Lindenwood graduate who interned with Vertical Voyages, hangs on to the rope while she climbs a tree.   Photo provided by Jon Richard

Richard said students have a free climbing period, and at the end of the class, a contest determines who can get set up to climb fastest.

Richard, a former science teacher, said he founded Vertical Voyages to “show people that you don’t have to go to Colorado to have a climbing convention.”

At that time, he was a rock climber in indoor gyms and in Southern Illinois.

“I saw a need to start an outdoor climbing guide service to give gym climbers the opportunity to do outdoor climbing,” he said. “Not only stuff locally, but train them and give them opportunities for really big trips.”

He later added tree climbing based on a client’s suggestion and now offers programs for schools and at the Missouri Botanical Garden.

Former Lindenwood student Abby Sturmer, a Ballwin native, signed up to take tree climbing in October 2012 after she saw people climbing outside Irwin Hall as a freshman, she said.

After the course, Sturmer, who was a business major, added a recreation minor and started helping Richard with other courses.  Now she works as a tree climbing facilitator for Vertical Voyages.

She introduced A.J. Garms, her then-boyfriend, to tree climbing at the Missouri Botanical Gardens.  The next semester, he also took the Lindenwood course, which he said gave him a new perspective and in-depth training.  Garms later proposed to Sturmer in the tree at the Botanical Gardens they first climbed.

Though he had rock climbing experience from the Boy Scouts, Garms said tree climbing has helped him cope with his “paralyzing fear of heights.”

“When we first started dating, I think my words to Abby [were] you’ll never get me in a tree,” he said.

Sturmer said that although it does not lead to a job for most students, the course is fun and easy to take with friends.  For her, tree climbing also has changed her perspective.

“It’s something that opens your eyes to something that’s all around you,” Sturmer said. “You can just see the bark up where no one’s touched it before.  You get to see little things like where squirrels hide acorns in the bark.”