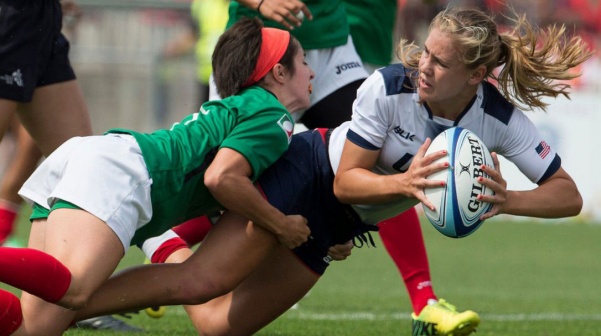 Richelle Stephens was living an athlete’s dream late in 2017.

She had made history as the youngest rugby player in the Olympics when the sport was introduced during the Rio De Janeiro games in 2016. And she had her sights set on the 2018 World Cup and the 2020 Olympics as she trained in Chula Vista, California.

But as fate would have it – that didn’t happen. Instead Jordy Burton Ostcott did.

The 2018 World Cup was coming up in July. Stephens took the spring semester off and went back home to California to train. If she performed well, she would be on her way back to the scrum wearing red, white and blue.

It was late at night in December and Stephens was driving home from an intensive training paramedicine class. Stephens suspected she was pregnant; the first person she told was Jon Otstott, her boyfriend.

“When I told him I’m pregnant, at first I was like there’s no way we can do this,” Stephens said. “This isn’t the way our lives are supposed to go.”

But Otstott convinced her to take a pregnancy test.

Otstott, a former rugby player, had a semester and a half left of college at Lindenwood and a negative bank account when he found out Stephens was pregnant.

Once the two red lines showed up, and after Otstott’s convincing, Stephens chose to return to St. Louis to be with him.

Stephens said her mom took the news worse than she thought, so she had Jon fly out to California to tell her dad.

“I couldn’t do it myself,” Stephens said.

When she came to St. Louis, Stephens broke the news to Billy Nicholas, the women’s rugby head coach.

“I was really nervous to tell him because he’s expecting me to go to the World Cup and I already took a semester off,” Stephens said. “But then I was like ‘I‘m doing neither.’”

Nicholas responded with support and Stephens became the team’s third “rugby mom” in the program’s history.

That semester Stephens had a chance to take a step back from rugby sevens and the high-intensity training life she had been immersed in since she was 15 years old. She said she felt burnout, but didn’t acknowledge it.

As an athlete, she missed holidays and seeing her niece grow up. She even chose to take online classes her freshman year of college, staying in Chula Vista to train.

“When I found out I was pregnant I was in a way relieved I didn’t have to go,” Stephens said. “I wanted to go, but it’s hard to live that athlete lifestyle though. Everyday you’re training and lifting.”

The culture of high-level sports also took an emotional toll.

“It didn’t feel like I really had that many friends because it’s so competitive,” Stephens said.

This spring semester, after a year off, Stephens came back to Lindenwood’s rugby team and school to resume working toward a bachelor’s degree in paramedicine. She will graduate in 2021 now.

The couple, Stephens being from California and Otstott being from Chicago, have parents hours away and have no family in St. Louis.

Instead, now Stephen’s teammates watch Jordy during class, during practice and in Evans during dinner.

“They have that giant built-in family here,” said Alicia Barey, their babysitter and former rugby player. “And I know all the rugby girls are obsessed with Jordy.”

Barey said she wanted to give Stephens a home away from home and knows it’s hard to find friends outside of the team who can babysit.

Since having a baby, the couple recognize that priorities have changed.

“My baby cried for three hours last night. My paper’s going to be late,” Otstott told his professor once.

Both have been willing to sacrifice time with friends and bonding with teammates.

“People my age, it’s like what do you do? You go to a bar and get something to drink,” Stephens said.

The first month back in school full-time, Stephens was missing being at home with Jordy and questioning her contribution to the team. She found lifting hard after having delivering Jordy through a cesarean section.

“‘What am I doing here? The only thing I can give my team is my brain.’ I can’t be there because I’m so slow and I don’t have the agility I used to.”

But now, Stephens said, “It’s been about three months I finally started feeling like myself again.”

Head coach Billy Nicholas said mothers on the team have taught him patience. He said expectations are high, but he makes it clear to the team he is going to be flexible with moms.

“At the end of the day, every mom that we’ve had that’s been a part of the team has given every free minute outside of rugby, school and family to the team towards the program,” Nicholas said.

Nicholas said he’s lucked out with his parent athletes because they set the bar high for the team.

“I would say that for our other athletes there’s not really an excuse to show up and not get school and rugby done,” Nicholas said.

In April, Stephens went to the rugby 15s team nationals and the team won its second year in a row.

Alicia Barey said she finds Stephens an inspiration because of her humility and generosity on and off the field.

“Being a starter on the team, obviously there’s a level of comfort that some people can get, but she doesn’t get that,” Barey said. “She’s always going 110 percent during practice.”

Otstott said it has been amazing seeing Jordy develop.

They nicknamed Jordy the “smile guy” because he never stops grinning at people.

“He is a curious baby,” Stephens said. “He thinks whatever’s in his arms reach is his.”

Stephens dreams have not changed. She is majoring in paramedicine and wants to be a firefighter. Otstott graduated with a bachelor’s in chemistry and is working for Vijon, testing hand sanitizer and other user products. Eventually, he wants to work in research, but for now he is working another job as a server.

Nicholas said his parent athletes, like Stephens, have shown having a child doesn’t have to ruin their athletics or prevent their education.

“You can still finish your degree, you can still play high-level sports,” Nicholas said. “They’re just shining examples that when you put your mind to it, anything’s possible.”

Stephens said she plans to stop playing rugby as soon as Jordy can put cleats on and toss a ball.

“He should be playing, not me,” Stephens said.

Today, they approach parenting like athletics. An athlete thinks they can’t, and then they do it.

“It would have been great seven years down the road, but he’s here, he’s awesome,” Otstott said. “We wouldn’t want anything else.”