The Spellmann Era, Episode 4: Spellmann left behind a legacy on LU 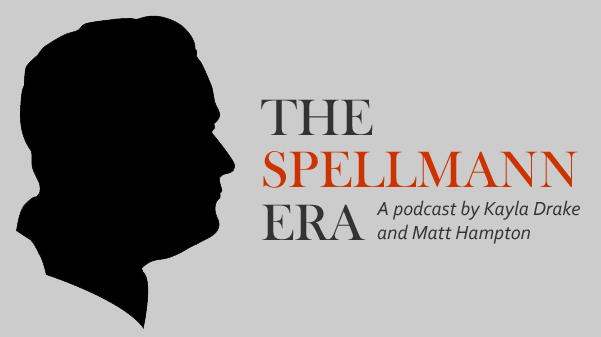 This is the last episode in a documentary podcast series about Dennis C. Spellmann, president of Lindenwood from 1989-2006. Click here for the previous installment. Below is a transcript of the episode. A list of sources is here.

Matt Hampton:  Were you still chaplain when he died?

MH:  What do you remember about that?

Kayla Drake: That was the Rev. Dr. Michael Mason, a religion professor, talking with our producer, Matt Hampton.

That day flags on campus were flown at half staff, and the alumnae gate was draped in black curtains in mourning.  According to the alumni publication, students made a makeshift memorial outside the president’s house, and around 1,600 people attended his service at the Hyland Arena.  The event included a Marine Corps military honors service in which a flag was presented to Spellmann’s wife.

In a eulogy delivered by Jim Shoemake, Lindenwood’s chairman of the board of directors, he praised Spellmann for his impact on Lindenwood, ambition and strong leadership.

“He was a steadfast captain, setting a certain and meticulous course through stormy weather and past dangerous shoals. He set the course, but also manned the wheel. He was a visionary, but also a native Texan, always ready with practical advice.”

Spellmann had six practical pieces of advice he gave students every year:

The provost, Dr. James Evans, took over as acting president. The following year Evans became the official president.  Evans came to Lindenwood in 1974 as a psychology professor.

Evans’ presidency – which lasted until 2015 – brought looser rules for students, the return of a student press, and more focus on academics for professors relative to his famously business-minded predecessor.  And yet, Lindenwood’s prosperity that began under Spellmann continued under Evans.

MM: They’re kind of different leaders at different times. Spellman was a turnaround artist Evans was kind of a stabilizer. 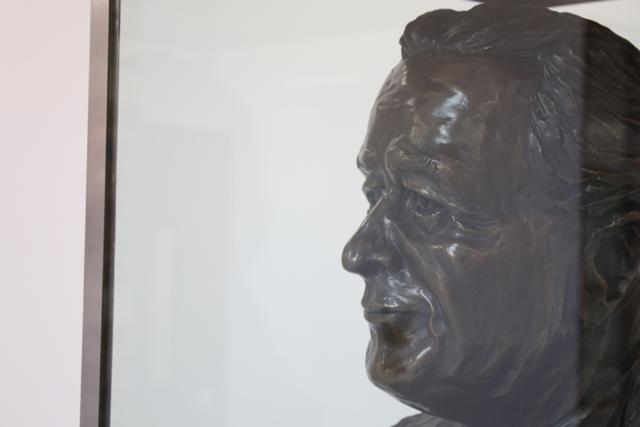 The bust of Dennis Spellmann in the building that bears his name. The original bust was stolen and never recovered. Photo by Matt Hampton

KD: Also, a bust of Spellmann was put in the Spellmann Center in his memory – but it’s not the same one that’s in the building today.

Professor Chad Briesacher: It was up on the fourth floor, and someone had stolen it.  They had another one made, but it was kind of interesting I guess, there was this big search, you know, and all these conspiracy theories about who stole the who stole the bust of Dr. Spelmann.

MH: That was Chad Briesacher, a mass communications professor who was a Lindenwood student at the time. Criminology students even searched a pond on campus for the stolen statue, but it has never been found, leading to endless speculation about where Spellmann’s original bust is today.

Dr. Christie Rodgers: I think somebody probably has somewhere.

Penny Bryant: They’re decorating it for every holiday. [Both laugh]

CR: I really do think somebody took it, and they probably have it somewhere.

MH: That was Dr. Christie Rodgers and Penny Bryant, who work in the Student and Academic Support Services office.  Like Professor Briesacher said, rumors abound.

KD: One cold winter morning, a few years before he died, Spellmann suffered an unfortunate fall on ice outside his home on campus (which is now Warner Hall, an administrative building).

Professor Richard Reighard: It gets slippery around here, and he always didn’t want to you know, spend money on salt ice everything down or whatever, but he was coming out of his house and it was an ice storm and everything was coated and you know, we did what we had to do.  He never wanted to close the campus, you know for snow or whatever. He figured, well, everyone’s living here anyway. Anyway, so it was ice covering everything, and he comes out on the sidewalk and he slips and apparently falls and breaks his leg.

KD: Spellmann laid outside in the freezing cold for a half hour. Despite this injury and his declining health, Spellmann stayed involved with Lindenwood until the very end.

Mira Ezvan, information systems professor, still recalls Spellmann’s last “State of the University” to faculty at the beginning of the fall semester in 2006, his last public appearance.

Dr. Mira Ezvan: He came to the meeting, not looking well, but he delivered, like his speech, just dwelling on how he hopes that his legacy is going to, you know, preserve and be continued. 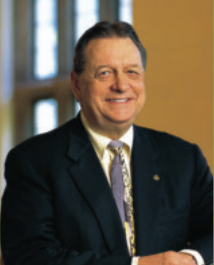 Though he was controversial, President Spellmann’s 17 years in office helped turn Lindenwood from a struggling college into a successful university.  Not only did he expand the main campus with building projects which continued after his death, but he also started Lindenwood campuses in Belleville and throughout the St. Louis area.

Professor Grant Hargate: Some dearly missed him.  There wouldn’t be a campus today if it wasn’t for Dennis Spellmann.  I believe that. This would have been a retirement village or houses all across this property.

MH: That’s Grant Hargate, an art professor at Lindenwood for over 3 decades.

GH: So there’s still a Lindenwood, thanks to him.

KD: Not only did Spellmann forever alter the face of Lindenwood, but the face of St. Charles, Missouri as well.

Steve Ehlmann: He was a friend, and he did some things for me and, like I said, most importantly, I think he saved my hometown. I didn’t have a chance to tell him that because he died in the hospital.

MH: Spellmann’s death brought mixed emotions to the faculty and students he encouraged and challenged.

GH: I think there was a feeling of – for some it was like sadness, and there were some that were saying “yippity dippity.” By the time he was sick and gone, he had already relaxed his administrative expectations about what we were supposed to be doing. I guess you get close to the end and you decide things aren’t so important. You want to be remembered as a nice person

KD: Spellmann certainly didn’t change his policies or bring back co-ed dorms or allow alcohol on campus in his last years, but some remembered him as more mellow and possibly – nice.

One thing everyone can agree on is Spellmann was a one-of-a-kind man.  Lindenwood took a desperate gamble on his unconventional approach, and it worked.

As said in his eulogy, Spellmann had “a style that is unique and that I doubt will ever be duplicated.”

SE: He was unique. He was different. He came in, he didn’t do the start of things that college presidents in the past had done at Lindenwood.  He obviously made some enemies. But he made a lot of friends. And in the end, it all worked out. 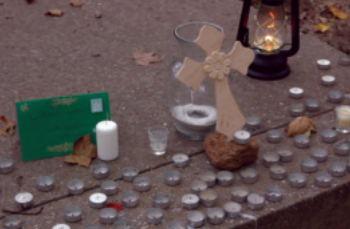 A memorial outside Spellmann’s house on campus after he died in 2006. Image from the Mary E. Ambler Archives

KD: So there we have it – the conclusion of the Spellmann Era.

MH: He was the man who pulled Lindenwood out of the fire, when the 160-year-old school was at the end of its rope.

KD: He was the administrator who worked questionable financial aid deals to save other struggling schools.

MH: He was a Texan, a veteran, and an Eagle Scout.

KD: He was known for his temper and stubbornness, but was he really as mean as his reputation suggested?

MH: He was the man who bought up the area around Lindenwood – bending the flow of First Capitol with his Herculean will – even against the protests of locals.

KD: And he was the business genius who balanced Lindenwood’s budget and led enrollment to skyrocket – even to the point that students were sleeping in dilapidated trailers and on cots in dorm lounges.

KD: He was thrifty, and had a talent for optimizing what he had.  That’s how he came up with pork for tuition. He was the president who revitalized Lindenwood sports, which brought in a record amount of students.

MH: But, he incited the ire of professors, who worried that he would cut academic standards, and criticized him when he got rid of their privileges

KD: Creating what one accrediting agency called an “atmosphere of repression.”

MH: Some students hated him too, because he imposed strict discipline on what was once a very relaxed school.

KD: He was a man with stubborn principles, even when everyone was against him.

With Dennis Spellmann you accepted the good with the bad.