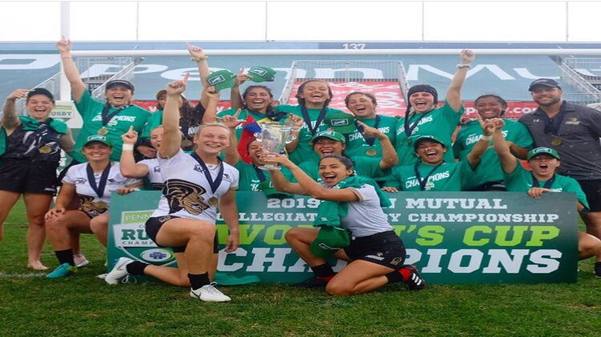 The women's rugby team celebrates with the trophy after winning the triple crown for a second year in a row and third national title in 2019.
Photo by USA Rugby.

The Lions put their name in the record books Sunday night as they were crowned the Penn Mutual Collegiate Rugby Champions (CRC) for the second time in a row in Philadelphia.

This year the Lions won the USA Rugby 7’s Championship for the third time in three consecutive years.

The Lions took their dominance from last week’s USA Rugby 7’s National Championship win in Arizona to Philadelphia. The team won six matches in a row at the CRC 7’s, including the championship match against Army with a 34-12 score.

Caring De Freitas and AnnaKaren Pedraza kicked off the championship match with seven points. For the rest of the match, the Lions never let go of the lead.

During Pool Play, the Lions swept the field by defeating Virginia Tech 34-0, Queens University of Charlotte 53-0 and Saint Joseph’s College 62-0.

In the quarterfinals, the Lions defeated Virginia Tech once again 25-0 and had to face Life University, last year’s runner up, in the semifinals. The Lions took the win 31-0 to advance to the championship match.

“I just want to thank our entire program for the dedication and effort they’ve put in the entire year,” Head Coach Billy Nicholas said. “Our administration and staff for the support and all our Lion family and friends around the world, we are so grateful to represent this University and to truly be a part of something larger than ourselves.”

The Lions closed their season with a 23-3 record and established itself as the top program in the country.