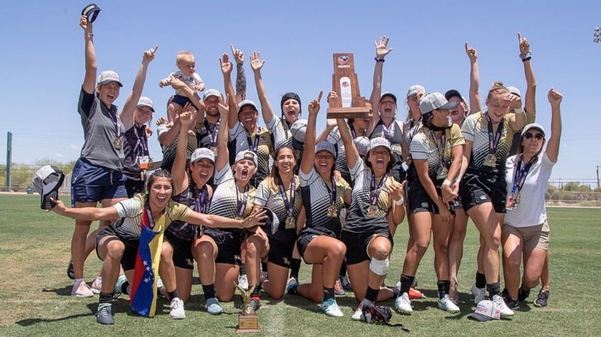 The Lindenwood women's rugby team celebrates with the trophy after their national championship win.
Photo by USA Rugby.

The Lions started the match with an early 12-0 lead. Dartmouth worked on a come-back and scored seven points but junior Caring De Freitas and senior teammate AnnaKaren Pedraza each scored to keep the advantage 19-7.

“We are really big on setting the tone of the game at the beginning so we got the opportunity to attack after a player for Dartmouth gave us a penalty and we decided to attack fast and move it all the way to the edge to Dineken Paogofie-Buyten, who run all the way from the 50 meters and scored!,” De Freitas said.

In the final two minutes of the match, De Freitas scored yet again to seal the victory and earn the recognition of Most Valuable Player for the second year in a row.

“It feels great to win for the third year in a row, it is a completely different feeling than we’ve had the other years,” De Freitas said. “We had lost against Dartmouth in pool play so meeting them in the final was amazing because we had that second chance to redeem ourselves and we did.”

The Most Valuable Player recognition came to De Freitas as a surprise.

“I’m very happy that I was chosen for it, however I think I’m not the only most valuable player on the team, all of us put so much effort and hard work into those games, so I want to share the recognition with the whole team, not just myself,” De Freitas said.

The Lions had a 2-1 record in the road to the championship match in pool play, a type of bracket, on Saturday. The Lions defeated 36-0 American International College in their first match, followed by a 34-0 win over Penn State.

But the Lions winning streak ended when they faced Dartmouth. The Big Green had a lead at the beginning of the match but by halftime, the Lions earned the lead back. However, coming from the break, Dartmouth scored to gain the lead 15-12 and ultimately win.

The Lions defeated Harvard 36-7 in the semi-finals.

This season marks two years in a row the Lions won the USA Rugby Collegiate 15’s and 7’s titles in the same season.

The Lions are also the reigning champions of the Collegiate Rugby Championships (CRC 7’s) with five straight wins.

The Lions will try to make it six times in a row when they travel to Pennsylvania to compete at the Talen Energy Stadium from May 31 to June 2.