Incoming president to LU: ‘Vision is done by all of us’ 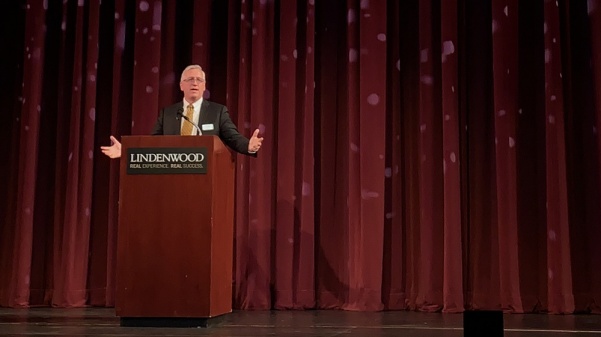 John Porter, Lindenwood's next president, speaks on Thursday, July 27, in the Lindenwood Theater.

John Porter, who will become president of Lindenwood University on July 1, said Thursday morning that he will build an ambitious vision for the university that includes many voices.

Interim President Art Johnson introduced Porter, who worked at IBM for 33 years in the United States and internationally.  Most recently, he was an executive at Gulf Business Machines in the United Arab Emirates.  He graduated from Washington University in St. Louis with a master’s in business administration in 2011.

“Let’s face it John, you have two things I don’t:  you have a degree, and you pick your deer meat up on time,” Johnson joked to Porter at the event.

“I thought you were going to say ‘hair,’” Porter replied.

Porter moved from Dubai a few weeks ago, and spent his first night in the president’s house Thursday night, Johnson said.

Porter spoke for 14 minutes and then took questions from the crowd in the Lindenwood Theatre.  Afterwards, lunch was served in the parking lot, where he met with attendees.

When an audience member asked him about plans for the university, he said, “It would be a little too soon for me to say ‘Here’s the strategy and here’s what I’m thinking we can go do,’ but I will tell you, from my personal perspective, I like to be aggressive, I like to go after areas that we all decide are worth us going after.”

One such goal he will work towards, Porter said, is finding, “new ways that we can drive revenue streams to keep academic achievement at the levels we need it to be at.”

Listening to and building relationships with the people who are a part of the university will be an important part of his leadership, Porter said.

Porter, who is earning a doctor of education degree from Johns Hopkins University, also said he hopes what he has learned from his courses and his international experience will help at Lindenwood. He is currently writing a dissertation on student evaluation of teachers.

Porter admitted the decision to stop undergraduate classes at Lindenwood-Belleville is “a sore issue for a lot of folks,” but said, “we’ll see kind of where it goes, but the decision’s been made, so we just need to execute.”

The Belleville News-Democrat reported that Belleville’s mayor intends to meet with Porter by July 10 to discuss the viability of the campus.

Porter has been married for 35 years to his wife, Beverly, a CPA.  He said he briefly wrestled and played football in college, and also loves weightlifting.

Outgoing acting president Johnson also spoke about his time at the helm of the university the past five months.

“I have to be brutally honest and tell you I have mixed feelings about leaving, and that I’ve gained so much respect for what you have done, for what you do, and the commitment that you make every day to ensure our success,” he said.

When Porter becomes president, Johnson will return to vice chair of the Board of Trustees, the position he held before Michael Shonrock, the previous president, was put on paid leave in February.

Shonrock leaving ignited a search, which was narrowed to three candidates, including Porter, in May.