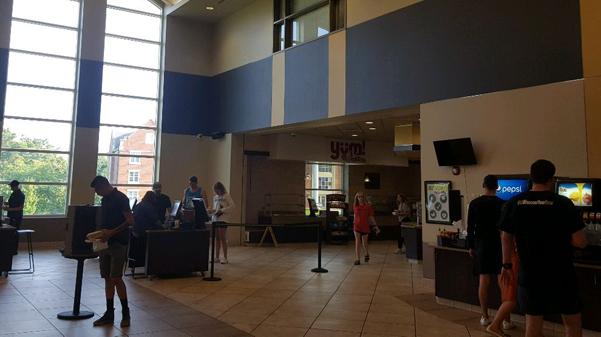 Students get dinner at the Evans Commons.

The Evans Commons cafeteria switched from “all you can eat” dining to an a la carte system like that in the Spellmann Center this semester.

Though some students said they prefer the upgraded menu and to-go containers, others have raised concerns about the changes.

Lindenlink conducted a survey of 28 Lindenwood sophomores, juniors, and seniors.  Four respondents said the changes to Evans are an improvement, and 21 prefer the way it was last semester.

The most common concern was that athletes may not be able to consume enough calories in Evans anymore.

“The quality and variety of food is better, but it’s not enough for the athletes that have to maintain proper diet throughout the season,” one senior wrote.

Of the respondents, 11 were student-athletes.

D. J. Cicha, a senior on the cycling team, wrote on Twitter, “Very disappointed in @LU_Lions decision to change Evans dining hall to non buffet style dining. There’s no way your precious athletes are getting the calories they need.”

Very disappointed in @LU_Lions decision to change Evans dining hall to non buffet style dining. There's no way your precious athletes are getting the calories they need. @Lindenlink @NCAA

Other problems students mentioned were longer lines, the removal of some options which were present last semester, and they can’t try as many items in one meal.

“We thought that sometimes, people felt that at Evans, the food sat there a long time, and maybe wasn’t good,” Tinker said, so now food is made to order.

She said chefs tested 35 recipes for Evans, and now the cafeteria features new items, including soups made from scratch, stromboli, and calzones.  Also, the mess hall’s omelette station is now open during breakfast and lunch.

Tinker said another benefit is, like in Spellmann, students do not have to pay to enter the Evans dining area.

But another concern some students have about the changes is the environmental impact.  Last year, Evans started using disposable dinnerware, but switched in February to reusable silverware again after an 800-signature petition started by student Annika Teschke.  Now, the cafeteria uses plastic utensils and disposable to-go containers for every meal purchased.

However, Tinker said the containers are made of compostable material.  Some students have said a separate compost container is necessary for the waste to be disposed of properly, but Teschke, a senior, said she will not be doing another campaign on the issue.

Tinker said it is not yet decided whether compost containers will be in dining halls in the future.

“Composting from our kitchen aspect goes very well, but I’ve asked if there’s the option for a couple bins that we could put out in the dining hall,” she said. “We have to find out if the recycling company will take them and do something with them, though.”