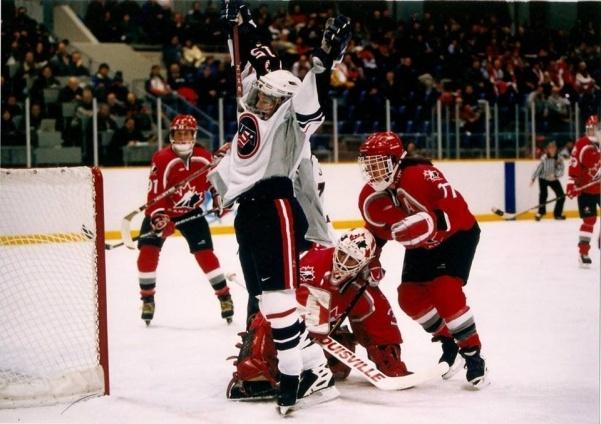 Shelley Looney celebrating the goal she scored to win the 1998 Winter Olympic Games in Japan.
Photo by USA Hockey.

The Lindenwood women’s ice hockey program is getting more than a new ice arena, it’s getting an Olympic gold medalist as a head coach.

After being a member of Team USA for almost 14 years and coaching at multiple levels, Shelley Looney comes to Lindenwood with a long list of achievements.

In 1998, Looney scored the game-winning goal to give the first Olympic gold medal to Team USA at the Winter Olympic Games in Nagano, Japan. Team USA faced Canada in the finals, the favoured country to win.

“I was fortunate enough to score the winning goal,” Looney said. “Being in Japan, you didn’t know what was going on in the United States, so hearing back from friends and family that got to witness it in the States, it was a big deal.”

Women’s ice hockey in the United States was just beginning in 1990 with its first selected national team. Winning in Japan only aided in the growth of  the sport.

Going into the 2012 Winter Olympic Games in Salt Lake City, Utah, Team USA was no longer the underdog and had extended its season-long winning streak to 37 games. The team shut out Sweden to advance to the finals.

Looney had the chance for a second gold medal, but first, they had to face a long-time rival: Canada. The final match was really close, and Canada ultimately won the gold medal.

After that, Looney competed in the 2005 International Ice-Hockey Federation Women’s World Championships, where she earned another gold medal after defeating Canada in Linkoping, Sweden.

Looney’s road to success, however, was not easy.

A native from Brownstown, Michigan, Looney began practicing when she was just 6 years old. Growing up, there really weren’t any women’s teams, so Looney joined a boys team.

“Overall, my experience playing with boys was a positive one, I had the same coach the whole time and he treated me like a daughter he didn’t have, ” Looney said. “Coach Slack, was a huge part of my love for the game, he instilled the importance of teamwork and hard work that helped mold the player I became.”

When Looney was in her senior year of high school, she qualified for the second phase of tryouts for the national team in Boston, but didn’t make the cut.

“It was probably a blessing I didn’t make it, it just drove me to work harder,” Looney said.

The following year, Looney went to Northeastern University and qualified for the national team. During her collegiate career, only three schools competed between each other, and every player on Team USA came from those schools.

When Looney was not selected for the Winter Olympic Games in Italy in 2006, she took some time off to recover from injuries and then decided to become a full-time coach. Looney closed her career as a player with 61 goals and 136 points in 151 games.

“I knew it was probably not the right thing for me to keep going, I felt like my time was great and I needed to look at the future,” Looney said. “14 years and two olympic medals, it was an amazing experience.”

When deciding to come to Lindenwood, it was a no brainer for Looney.

“I came down here and the campus blew me away,” Looney said. “With the new rink, the backing of Lindenwood and where Hockey is gonna go here, I thought it was a great opportunity.”

Looney had been working for several years growing youth programs and thought this was a “great opportunity to work with a smaller group all the time.”

The Lindenwood women’s ice hockey team is equally as excited as Looney is to begin working on the ice.

“Our whole team absolutely loves her as a coach because of her personality, her coaching abilities and mindset,” sophomore goalie Sophie Wolf said.

Looney has had one-on-one meetings to get to know the players personally before they could officially work on the ice.

With the new Centene Community Ice Center as the home for both the men’s and women’s ice-hockey teams, Looney is excited about the future.

“I want to come in and give them [the team] confidence,” Looney said. “We start our season opener against Wisconsin, the number one team in the country, but being home will give us some energy and excitement.”