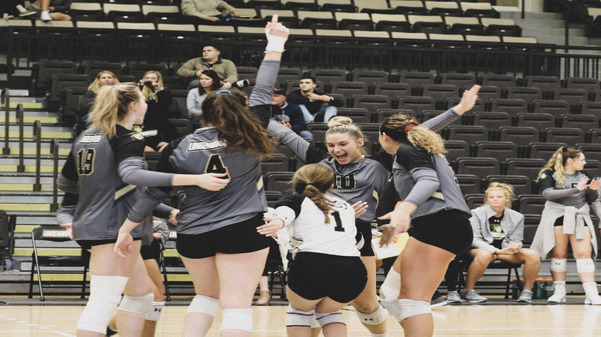 Archive: The Lindenwood women's volleyball team celebrates after winning a point during a match in the 2018 season.
Photo by Merlina San Nicolás.

The Lindenwood women’s volleyball team defeated Limestone College in less than half an hour on the first match of the season on Friday night.

The Lions dominated the match from beginning to end, outplaying Limestone’s defense and holding their attack percentage to a .087.

According to the Lindenwood Athletics website, senior Kat Finnerty led the Lions to the victory with 11 kills, five blocks, and three aces with a .364 hitting to finish the game with 17 points total. Middle hitter Sadie Kosciuk registered nine kills, five blocks and two aces.

The lone international athlete of the team, Maider Sancho from Spain, recorded five kills and had no errors for her first collegiate match.

The Lions were selected ninth in the preseason poll by the Great Lakes Valley Conference (GLVC) and received 115 points, just 16 shy from eighth-place McKendree.

The All-MIAA returners for this season are Alexa Pressley and Sadie Kosciuk, who was also in the top 30 of the NCAA DII.

The Lions will have two more matches today taking on Tusculum College at 9:30 a.m. before battling host Georgia College at 5 p.m. in Milledgeville, Georgia.