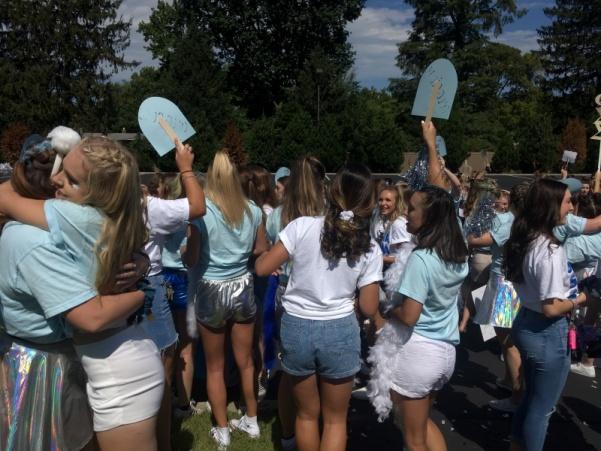 “[Recruitment Week] gives women the ability to get a feel for each sorority,” said Panhellenic President and Phi Sigma Sigma member Jessica Goddard.

Both upperclassmen and freshmen women participated in socials and events during Sept. 4-6 at the St. Charles convention center and J. Scheidegger Center to mingle with all three sororities.

All four of the Panhellenic Association members, as well as a select group of individuals from each sorority serve as recruitment counselors, often called Rho Chis. Each individual must disaffiliate from their respective organizations to serve as unbiased sources.

Delta Zeta member Taylor Fumagalli served as a Rho Chi for the week to help the potential new members get the most out of the experience.

“[The point is] making sure the girls find where they belong,” she said.

Bid Day is the final day of recruitment week, and it’s the day when the potential new members sign the extended ‘bid’ of their chosen sorority. It also ends the period of disaffiliation for Panhellenic members and Rho Chis.

“My friends are here,” Junior Jayde Lickenbrock said about joining Sigma Sigma Sigma. “I stand with their beliefs and values.”

“I really felt at home on the last night,” freshman Alexandrea Manno said when asked why she picked Delta Zeta.

The highlight of the day is when newly signed members run to join their sorority sisters, accepting their bid.