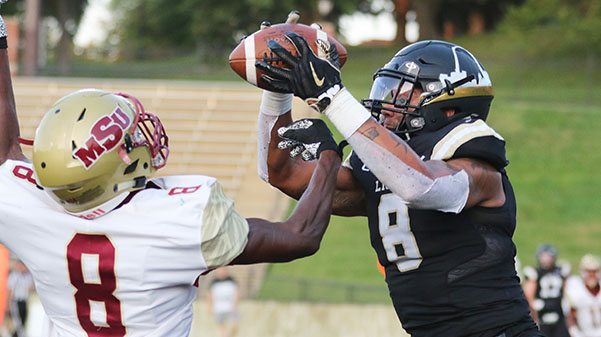 Lions tight end Erik Henneman catches a touchdown pass in the first half despite Mustang defensive back Jaydon Cunigan's effort, making the score 7-14.

Searching for their first victory at home since the 2017 season, the Lindenwood Lions fell to the Midwestern State Texas Mustangs by just one point, 28-27.

In a game that was filled with turnovers, Lions quarterback Cade Brister fumbled with just 0:31 left in the fourth quarter in Mustang territory with the hosts down by one. This was the fourth turnover of the game for either side, all being fumbles.

It was Midwestern State that got off to a hot start, scoring on their opening two drives. Running back Quinton Childs finished off a long first possession, running it in from three yards out. The very next Mustang drive, Childs broke numerous Lindenwood tackles to run for a 46-yard touchdown to give the guests an early 14-0 advantage.

Lindenwood’s defense responded with quick adjustments after the first two Midwestern State scores, holding the Mustangs off the board for the remainder of the first half. They would only score in two of the four quarters in the game.

Offensively, the Lions were able to make it into the Mustangs’ half for a majority of the second quarter. But due to penalties and a missed field goal, only a zero was on the scoreboard for Lindenwood for much of the quarter. That was until the Brister to Erik Henneman connection found it’s groove, with the two connecting on an 11 yard touchdown with 2:29 left in the half.

Starting off the second half with possession and the momentum on Lindenwood’s side, the Lions took full advantage of it. After a couple of successful plays to begin the drive, the Lions got creative, tossing the ball back to wide receiver Najee Jackson who chucked it deep for Payton Rose for a 51-yard score. Rose’s third touchdown of the season tied the game up 14-14.

With 8:29 left in the third quarter, Lions kicker Brett Garner had his potential go-ahead field goal blocked from 25 yards out. The Mustangs would go on to find the endzone, with Childs scoring his third touchdown of the game to put the visitors back on top.

The Lions followed this up with yet another drive that was long but didn’t alter the scoreboard. On the eighth play of a 3:22 drive, Brister was sacked by Mustang defensive lineman Melik Owens, with fellow Mustang Zach Edwards recovering it and taking it 66 yards before being eventually tackled at the Lions’ 10-yard line.

Midwestern State capitalized on their plus field position, with quarterback Zach Purcell finding receiver Xavier Land for an eight-yard score to restore the Mustangs’ two score lead which lasted the remainder of the third quarter.

On a Jared Stangler punt to begin the fourth quarter, Mustangs returner Juwan Johnson fumbled the ball, giving the Lions possession on the Midwestern State 33 yard line. Brister wasted no time in making good use of the strong field position, finding Rose downfield for a 33-yard score to make it a seven-point game.

Around the 3:59 mark of the fourth quarter, the Lions began their final drive of the game. Brister and running back Nash Sutherlin were cutting through the Mustangs defense back-and-forth on the ground, getting into field goal range while also taking time off the clock. On a 3rd and 5 with 0:31 left in the game, Brister scrambled for five yards but fumbled at the end of the run, with the Mustangs getting possession.

Brister threw for 295 yards and three touchdowns, while also putting together a strong rushing performance in the loss. Henneman led the way in terms of receiving with his first 100 yard game of the season and scored his second touchdown. Rose had 95 yards and two scores, followed by Jackson who had 79 receiving yards and one touchdown to go along with his passing touchdown.