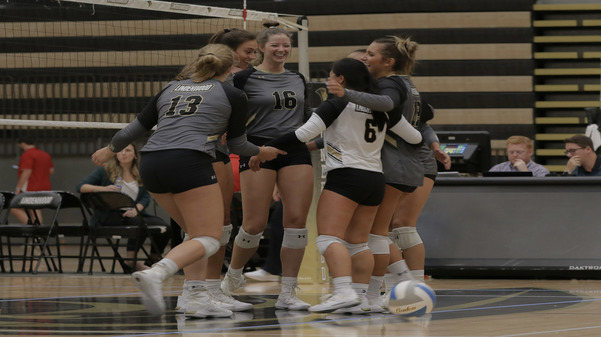 In the center, Kelly Willson (16) celebrates with her teammates after winning a point against Flagler College on Friday night at Hyland Arena.

The Lindenwood women’s volleyball team are 7-2 overall after falling to conference rival McKendree this morning at Hyland Arena during the Lindenwood Challenge this weekend.

The Lions achieved their sixth sweep of the season on Friday night with an energized young team. With full control of every set, the Lions defeated Flagler College 19-25, 18-25 and 18-25 with three freshmen, one junior and one senior.

According to the Lindenwood Athletics website, senior Kelly Wilson led the Lions with 11 kills on 17 swings with three errors to lead the match with a .471 attack percentage.

Freshman Mackenzie Sifuentes led the match with four blocks, seven kills and a .400 attack percentage. Maider Sancho, a freshman from Spain, was just one point short from her first double-double of the season with nine kills and 11 digs.

However, for the first match on Saturday morning against McKendree, the tables turned and the Bearcats defeated Lindenwood 3-1.

This is the 13th time that the Lions met with the Bearcats. The Lions have a 9-4 record against McKendree, with the last win being Sep. 7 of last year.

The Lions lost the first two matches against the Bearcats but rebounded in the third set to win. Fourth set was a close one, but the Lions eventually fell to the bearcats 26-24.

The second match of the day was victorious for the Lions when they met Maryville University for the first time in 3 years, wining 3-1.

Maryville started the first set with a four point lead. The Lions were able to cut it to two points, but ended up losing the first match for a 25-20 score. During the second set, the Lions powered through to score seven points and keep a big lead on the Saints, taking the set 15-25.

Third set became more challenging when the Lions’ lead was cut by the Saints after they successfully scored six points in a row. However, the Lions kept a three point lead to finish the set 21-25.

In the final set, the Lions scored almost 10 times in a row to finish with a score of 20-25, claiming the last win of the Lindenwood Challenge.

Wilson and Sadie Kosciuk were named to the All-Tournament team.

The Lions will encounter Southwest Baptist University next Friday and Drury University on Saturday.