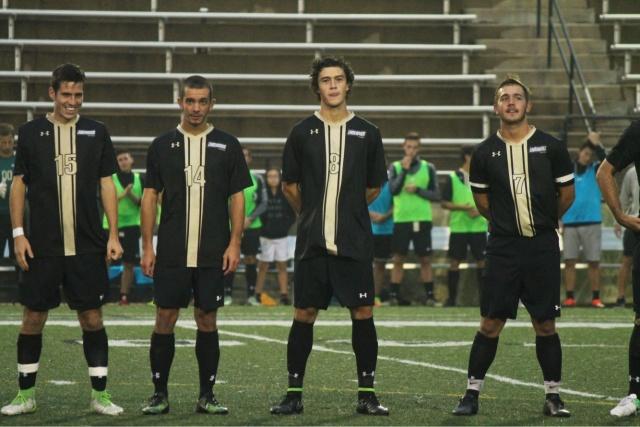 The Lindenwood men’s soccer team tied 0-0 with the Lewis University Flyers at Hunter Stadium due to a total defensive effort from both teams.

A chilly, rainy evening wouldn’t stop either team from
being aggressive and competing. The Lions and Flyers combined for a total of 29
fouls being called throughout the match.

Even though the Lions were outshot by the Flyers 21-15, the Lions had more shots on goal than the Flyers 6-5. Thomas Hutcheson and Andrei Ciot both had three shots each that were unsuccessful.

The tie is the second straight tie for the men’s soccer team, who tied with the University of Illinois-Springfield 1-1 on Friday.

“We’re growing, cutting down on our mistakes and we still don’t play simple enough to limit, which puts us in dangerous situations at times,” head coach Carl Hutter said. “But we are growing, defending and finishing first and second balls much better, now we just need to find a way to finish a game.”

The Lions scored a goal late in the match that
would’ve sealed the win, but the goal was called back due to offsides. The same
fate is what caused the 1-1 tie on Friday.

“We’re getting better each time,” Hutter said. “We’re
proud of the way they’ve played tonight and especially Friday, where we played
85 minutes with one less man because of a red card.”

The Flyers had multiple opportunities to score, with 21 total shots and five shots on goal throughout the match. Goalkeeper Tim Licht had five saves on the goal, playing all 110 minutes of the match.

“Licht made some great saves,” Hutter said. “We cut
down on chances and played tight, but when they broke through, Licht was
there.”

The men’s soccer team looks to bounce back on Sept. 27 at the University of Southern Indiana. Before the two ties, the Lions were enjoying a two-game win streak, both wins being at Hunter Stadium.

The men’s soccer team will compete the next four games away from Lindenwood. The next home game is at Harlen C. Hunter Stadium on Oct. 11 against Missouri S&T.