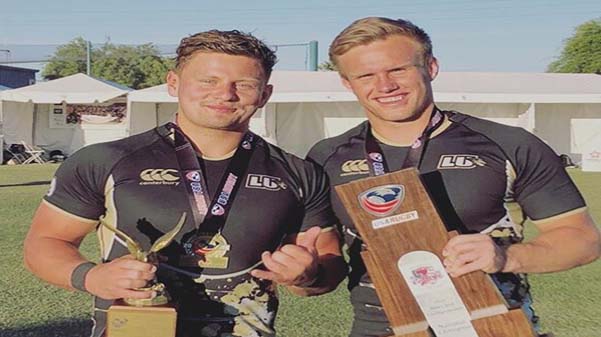 Wesley White and Michael de Waal pose for a photo with their trophies and recognitions after winning the rugby national championships for the third year in a row in May.
Photo taken from de Waal's instagram.

Wesley White, inherited from a line of rugby.

“Just the journey has been so special for me,” White said. “There have been so many moments that I will cherish for a lifetime.” 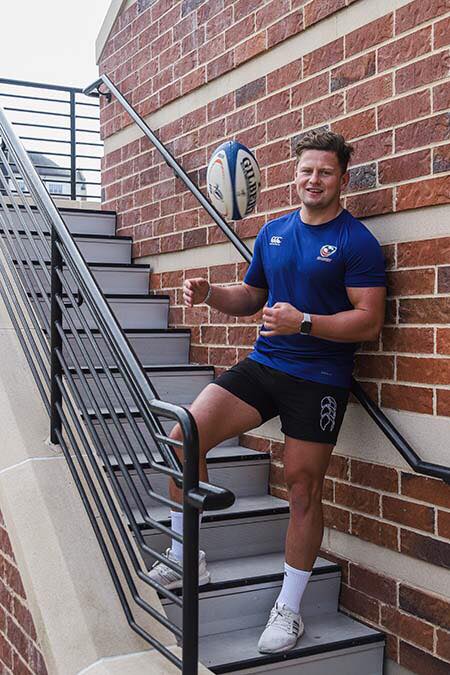 Wesley White, a native from South Africa, is a two time All-American and Most Valuable Player. Photo by James Tananan.

White had several offers from different professional teams. When it came down to making a decision, White liked the idea of playing for a young team with new head coach, Todd Clever.

Clever is the most capped player in the United States rugby history and was both a player and a captain of the US national team.

After signing a professional contract, White became ineligible for college play. Still, White will be on campus practicing and completing his last semester of college and hopes to be an inspiration for the coming generations.

“Most people think that natural talent is good enough,” White said. “But it is going to meet its match in a certain point of time, so go improve every single day. I have learned that from my role models, even at their peak games they have not found clarity in their game.”

The experience of coming to the US to play rugby has shaped White’s life in a way he never thought it would.

“The experience made me grow up quickly, I learned a lot [about] people and myself,” White said.

Rugby is not only a sport for White, it also runs in his veins. White started playing at the age of 5 and his dad, Jake White, coached the South African National team, the Springboks, to victory in the 2007 Rugby World Cup. In 2010, Jake became a member of the World Rugby Hall of Fame.

“I am really proud… he has been given the opportunity to play at Austin under Todd Clever as a coach in the American major league,” Jake said. “I am excited to see how the league develops and to see Wes develop his game over the next few years.”

But Wesley isn’t a stranger to the professional scene. In 2015, Wesley was part of the French team PRO D2 for four months, then a friend suggested crossing the pond to play collegiate rugby.

“I thought he was crazy,” Wesley said. “But now I’m here and it has been the best decision I have ever made.”

Recently, Wesley was at the Olympic Center in San Diego with Team USA as he was named a 2019 Men’s Collegiate All-American by USA Rugby.

Wesley’s eligibility is still on hold for the Olympics, but he said he will be ready in January to try out for USA Rugby 15’s and 7’s.

Just like White, de Waal comes from a family of rugby players from South Africa. 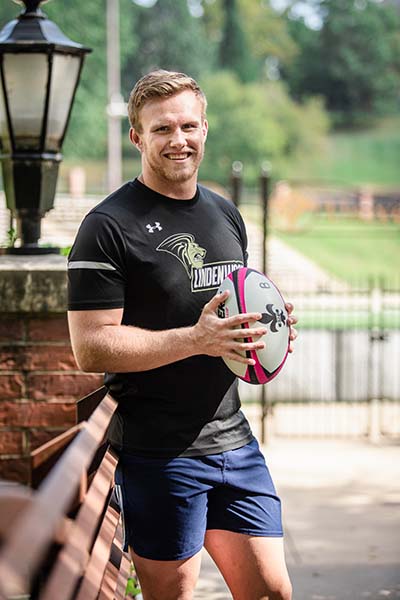 Michael de Waal will be moving to Texas in January 2020 to start competing with the Austin Herd. Photo by James Tananan.

On Sept. 24, de Waal signed his three-year contract with the Austin Herd. After graduation this December, de Waal said he is looking for a fresh start in a warmer state in 2020.

“I think this was the right time to do it [go professional],” de Waal said. “I spoke to other teams but I didn’t really see myself anywhere else. I really think I can fit in with the team and make a difference.”

Looking into the future, de Waal is not only thinking about rugby. A fresh start in Texas means new connections for his career as well. De Waal is a math major with an emphasis in actuarial science.

At Lindenwood, de Waal was a two time USA Rugby Collegiate All-American and Lindenwood’s Most Valuable Player for two seasons in a row. He was also part of the Lindenwood team that won the USA Rugby 7’s three times in a row and the back-to-back national championship this past summer.

“Winning as a team, that’s the best,” de Waal said.

The 24-year-old flanker grew up playing for the Pretoria Boys High School, an institution that is recognized for producing outstanding rugby players.

When de Waal was 16, he moved to Stellenbosch, near Cape Town, to play for the Maties Rugby Club, the second oldest rugby club in South Africa. Then an injury made de Waal reconsider his options in rugby.

“I kind of wanted to restart,” de Waal said. “I was frustrated with the workload back home and wasn’t really enjoying rugby anymore.”

De Waal started looking into playing collegiate rugby in the states. With a scholarship offer from Lindenwood and the opportunity to get a degree, it was the perfect moment for him to get a fresh start.

“I knew there was a lot of international players and it was also one of the top schools for rugby,” de Waal said. “I just didn’t want to go to any school.”

Rugby did not only give de Waal the opportunity to become an All-American in another continent, but it also gave him meaningful relationships that have changed not only his rugby career, but his life as well.

“You meet so many people, so many new relationships with people around the world or even just in the US,” de Waal said. “Those little connections that you’ll never lose because you are actually on a team together, opportunities like this, like coming to Lindenwood, I probably wouldn’t have done it if I didn’t play rugby.”

Wesley and de Waal knew each other growing up, but grew closer in college. In January, the life-long friends will kick off their stateside professional careers together.

“It definitely makes it easier, going with someone you have had a good relationship with,” de Waal said.

While Austin Herd is currently ranked last in the MLR, Feakes said he is confident that the team will be more competitive after new off season signings, which include White and de Waal.

“They’re both really talented players and I’m sure they’ll leave their mark in the MLR just like they have at Lindenwood,” Feakes said. “I’m looking forward to playing against them next year.”

Austin Herd will kick off its season Feb. 9 vs the Toronto Arrows.