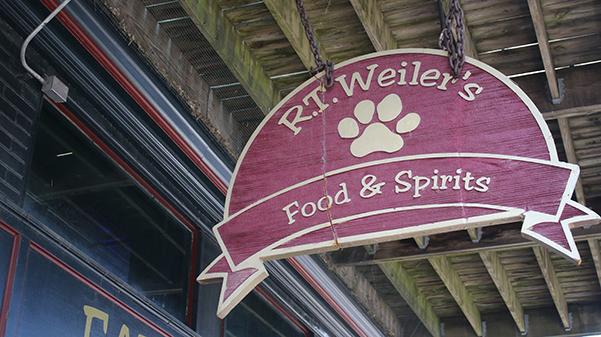 The sign in front of R.T. Weilers on Main Street. The building's facade bears the words "Sit. Stay. Eat. Drink."

Correction Sept. 28, 2019, 5:32 p.m.: A previous version of this article stated R.T. Weiler’s would have free drinks with a cover charge on Saturday and Sunday. This is incorrect. The restaurant was having drink specials and happy hour. I apologize for the mistake. -Matt Hampton, news editor.

R.T. Weiler’s, a restaurant and bar that has been on historic Main Street for 18 years, is closing Sunday.

The business will soon join other Main Street bars which have recently shut down, including Bobby’s Place, an establishment on the same block as R.T.’s that closed in January.

The family-run establishment is known for its unique atmosphere.  Photos of customers’ dogs adorn the walls, and patrons are welcome to bring their pets to eat with them on the patio.

The owner, Marc Rousseau, said despite other bars closing due to liquor law changes passed last year, he doesn’t think R.T.’s closing has anything to do with it.

“[The law] really didn’t change much for me,” he said. “It certainly didn’t help anything.”

Perry Shaffer, a bartender who has been working at R.T.’s for six months, said the closing could have to do with the younger crowd going to newer bars.

“On this side of Main Street, it’s become slower and slower as far as customers go. You have your regulars and the customers who have been coming here for 10 years and stuff like that,” Shaffer said. “This is also one of the last few bars with a live band, we get a lot of middle-aged people who like that, I feel like that might be a part of it.”

Before it shuts down, R.T.’s will auction off the restaurant’s dog-themed decorations and other items.

Rousseau said his favorite part of the bar was the community.

“It just has that community feel and that hometown feel, and it’s just a wonderful place to be,” he said.

Rousseau doesn’t plan to re-open R.T.’s or a new bar within the next year, but has not completely ruled it out.

“Right now I plan on getting into the dad business real heavy and enjoying that for a little while, we’ll explore for a little bit and see where it takes us next,” he said.