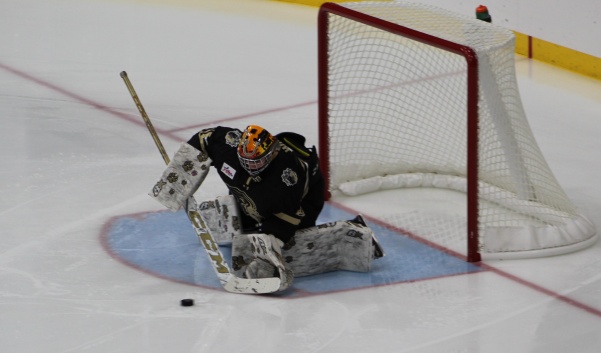 Goalie Sophie Wolf from Ontario blocks a shot during the game opener of the season against the University of Wisconsin on Friday night at the Centene Ice Community Arena.

The Lindenwood women’s ice hockey team kicked off its season with two losses to the University of Wisconsin on Friday and Saturday at the Centene Community Ice Center.

The Badgers scored in the first period once, twice in the second period and once in the third to beat the Lions 4-0 on Friday night.

Lions goalie Sophie Wolf made 35 saves as the Lindenwood offense struggled to control the puck, producing only 17 shots. Wolf was consistent throughout the 60 minutes of play, making 18 stops in the second period.

According to the Lindenwood Athletics website, Cierra Paisley won 13 faceoffs out of 21 and posted two shots on goal. Junior Hannah Alt and freshman Gigi Pora from Ontario accumulated three shots each.

Alt posted the first goal of the season and also the first goal for the Lions on the new ice arena on Saturday afternoon. However, the Lions’ fight soon came to an end when the Badgers powered through to score three times just four minutes into the first period.

Only 24 seconds into the second period, Wisconsin scored yet again, and the Badgers scored one more time in the third period during power play.

Sophomore Kayla Martínez beat a defender to place the puck on shot and freshman Lauren Dabrowski successfully netter her first career goal, but the Badgers scored yet one more time to secure the win.

The Lions’ longest win streak against Wisconsin was four games, the last one being in 2011.

The Lions are now 0-2 overall and will face Bemidji State University in Minnesota next weekend for two matches starting on Friday at 6 p.m.