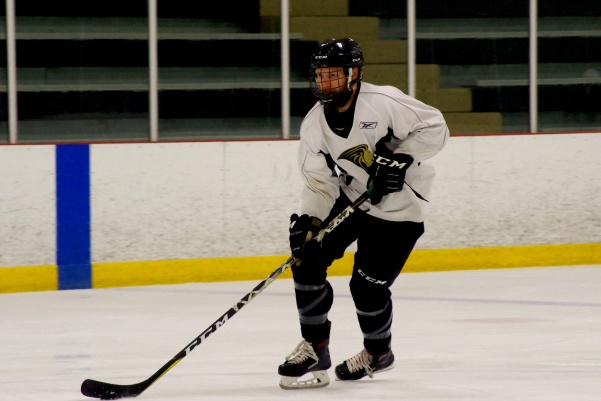 File photo: Defender Jake Townsend (#21) keeps an eye on the puck during practice in the Wentzville Ice Arena.

The Lindenwood men’s ice hockey team kicked off their season with two-weekend matches against the University of Central Oklahoma on Saturday and Sunday.

With a large crowd on Lindenwood’s side, the Lions dominated their opening match against the Bronchos from beginning to end on Saturday night.

The Vice President of Intercollegiate Athletics, Brad Wachler, dropped the puck to begin the game.

The Lions took the lead in power play in minute 13:33 in the first period when junior Vegard Faret from Norway fired a shot assisted by Alex Kalau and Brendan Murphy.

The Lions kept putting on pressure when sophomore Hayden Ursulak from Canada fired the second goal only seven minutes into the second period. Ursulak was assisted by Kalau and Kyler Newman.

With almost two minutes into the third period, Ursulak netted a goal yet again with the help of Murphy to get the Lions to a three-point lead from the Bronchos.

A goal during power play by Aapo Nurminen gave the Lions the victory for a 4-0. The Lions outshot the Bronchos 52-25 and lion goalie Cooper Seedott stopped all 25 shots on goal.

However, the tables turned on Sunday afternoon when the Bronchos defeated the Lions 0-2.

While the Lions kept putting the puck near the net, the Bronchos goalie didn’t let it come any closer, successfully stopping 42 shots.

The Lions outshot the Bronchos 42-30 and Seedott was able to block 28 pucks.

According to the Lindenwood Athletics website, the Lions didn’t lose a single match until January last season. Next, the team will face the University of Michigan-Dearborn, currently ranked fourth in the preseason for the American Collegiate Hockey Association DI.

The coming matches in Michigan are set to begin at 7 p.m. on Thursday and Friday.