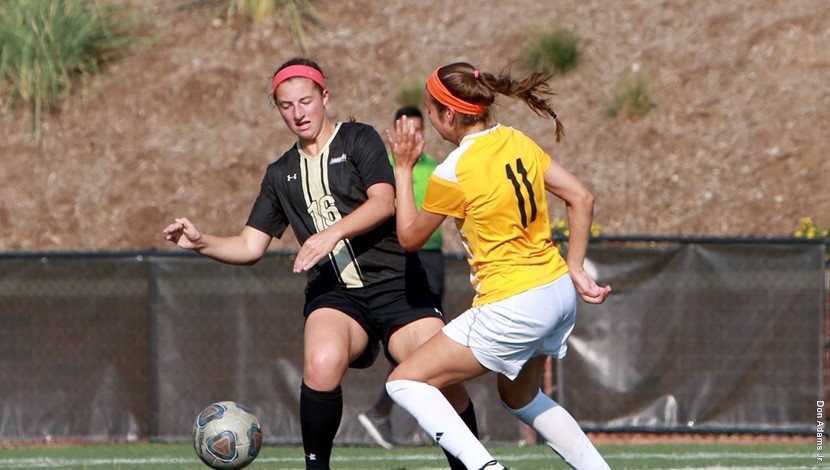 The Lindenwood women’s soccer team finished the weekend 1-1 after Friday’s match against the University of Indianapolis and Sunday’s encounter with Bellarmine University.

The loss on Friday at the hands of the University of Indianapolis was the first match this season that the Lions allowed more than one goal, losing 3-1. Goalkeeper Megan Swanson saved three goals for the Lions, adding to her already impressive 31 saves on the season.

“Megan has been fantastic, she makes key saves, but the back four in front of her have been outstanding as well,” head coach David Musso said. “Freshman Kaleigh Kastberg has been rock- solid dynamite in the middle as well as Jill Wipke, Ava Burke and Maria Salm.”

Following the loss to the University of Indianapolis,
the Lions avenged the loss with a win at Bellarmine University to end their
four-game away streak, which resulted in a 1-3 record.

“Our identity is our defense,” Musso said. “The goals on offense will eventually come, I’m excited to see us score early and no longer chasing the game. Once you start chasing, you lose your identity.”

The win at Bellarmine University was another defensive masterpiece by the Lions, winning 1-0. Swanson added nine saves, matching her career-high for a game. She registered her seventh shutout victory of her career. The lone goal came from forward Maggie Miller, who scored early in the second half, her team-leading third score of the season.

“The win Sunday was the biggest win for this program in the past two years,” Musso said. “It proves that we can beat really good teams if we come together, you get tired of losing and look in the mirror and remind ourselves how good we are. The win against Bellarmine University proves we can compete with any team in this league. We’ve outplayed most of the teams that beat us 1-0, they just take advantage of the opportunities to score.”

After the four-game away stand, the Lions return to
Hunter Stadium on Oct. 11 to host Missouri S&T.

“Our current goal is getting better each day,” Musso said. “We are built for the postseason with our defense, five of the next six games are at home. We will be comfortable and able to build momentum.”